The financial response to Ebola: Are there links between funding flows to countries and the number of cases?

The financial response to Ebola: Are there links between funding flows to countries and the number of cases? 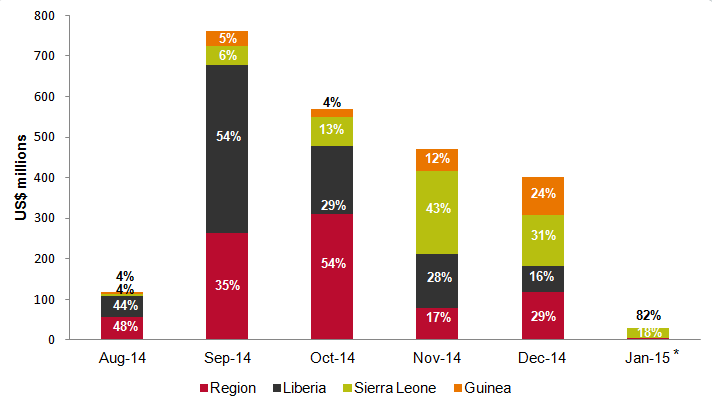 Regional and country-specific funding to Guinea, Liberia and Sierra Leone has varied considerably from month to month. While comparing funding flows with cases is useful, the large proportion of unearmarked funding recorded as regional makes it hard to reach firm conclusions.

In October, the month after Liberia received the largest proportion of funding (54%), the number of monthly cases in the country peaked at 2,829. Since then, the rate of new reported cases in Liberia has declined, along with funding specifically earmarked for Liberia, which fell to 16% in December 2014 with no new funding allocated in 2015.

The funding response targeting Sierra Leone was built up more slowly, eventually peaking in November 2014. Although Sierra Leone received 43% of total funding to the most severely affected countries that month, this was still less than half of the amount Liberia received at its peak – US$205 million compared with US$413 million. The number of new cases in Sierra Leone has consistently remained above 2,300 per month since October. Sierra Leone has also reported the highest number of overall cases at 10,094, almost half (48%) of all cases across the three countries, but it only received 20% of total funding directly.

Critically, for every month recorded, a significant proportion of funding is unearmarked – that is, not allocated to a specific country in the region. These regional amounts also vary considerably each month, and so complicate the spending picture at country level. More details on recent funding to the Ebola crisis can be found in our recent GHA briefing.

Share The financial response to Ebola: Are there links between funding flows to countries and the number of cases?