Development Initiatives has appointed Adrian Lovett to lead the organisation as its new CEO.

Adrian Lovett is a skilled and respected leader with over two decades’ experience working in international development and advocacy, focusing on evidence-based policy change at global, regional and national levels. He will begin the role on 31 October 2022. 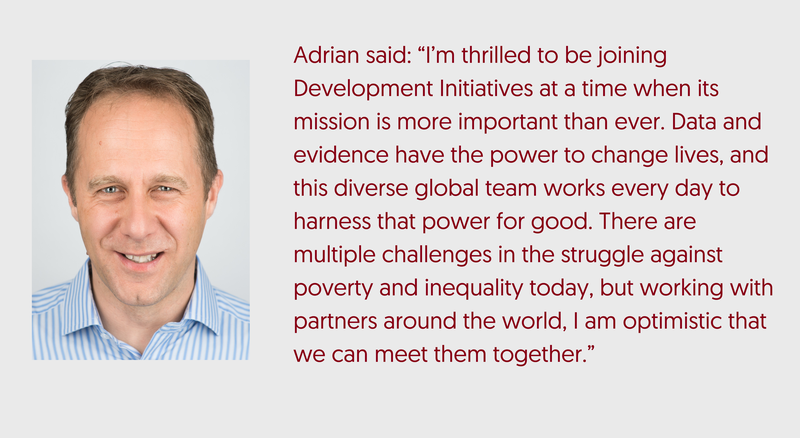 Sue Wardell, Chair of the Board at Development Initiatives, said:

“We are delighted to announce the appointment of Adrian Lovett as CEO of DI. Adrian brings to this post a global reputation for his work on international development issues; extensive CEO experience and a strong commitment to DI’s mission and vision. He will be taking over from Harpinder Collacott who is moving on from DI after 10 years of outstanding service during which she has built DI’s reputation as a highly professional organisation with global reach and impact.”

From 2017 to 2022, Adrian was President and CEO of the World Wide Web Foundation, working with the board and staff team in twelve countries to help increase affordable access to the web and address threats to its founding vision. During this time, he served as a commissioner on the United Nations Broadband Commission and as co-chair of the World Economic Forum Council on the Connected World.

Prior to this, Adrian was Europe Executive Director and interim CEO of ONE, the campaigning and advocacy organisation co-founded by U2’s Bono to help end extreme poverty. He played a key leadership role in successful campaigns such as Make Poverty History and the Jubilee 2000 campaign to cancel the debts of developing countries; Adrian has also held senior roles at Oxfam and Save the Children.

Our 2021 progress report summarises the action we have taken in the last year to deliver our mission and vision, and the impact we are having.

DI is pleased to announce four new members have been appointed to the organisation’s board of non-executive directors.