This post responds to a UNICEF Speaker Series event held on 22 April: An Analysis of Fiscal Space for Social Protection in Tanzania – what’s in it for Uganda?

Multidimensional impacts of social protection (i) 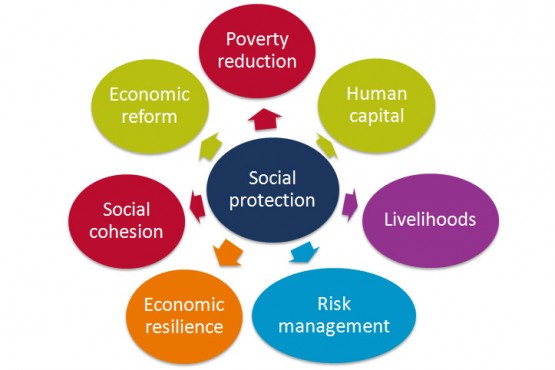 Sub-Saharan Africa has experienced stable economic growth over the past decade or so. However, this growth has not translated into commensurate poverty reduction or an improvement in the lives of the most poor. The 2014 Poverty Status Report in Uganda shows that despite stable growth the combined number of Ugandans that are either poor or vulnerable to poverty is 63% of the population, or 21.4 million. The broad-based growth agenda of Uganda differs from a pro-poor growth approach such as that adopted by Tanzania, which offers better prospects for the poor and vulnerable.

In the case of Uganda, analysis of fiscal space involved identifying additional revenue sources to bolster the country’s ability to pay. This involves increasing the scope and effectiveness of existing revenue sources. Key questions to be considered include: is further investment in social protection affordable and feasible? Are social protection investments feasible in light of budget deficits and low revenue collection? Is social protection sustainable given the large number of dependents among Uganda’s population? (iii)

Meanwhile in Tanzania tax revenue analysis suggests broadening the tax base and reducing tax exemptions and tax evasion rates. Specifically, tax exemptions need to be more pro-poor, tax evasion needs to be countered through stricter legislation, and additional tax revenue sources such as airspace tax could be explored.

Fundamental to financing social protection in both Tanzania and Uganda is the political commitments by policy makers to find the fiscal space that will resource these programmes. Social protection should be seen as investment rather than expenditure to lift the most vulnerable people out of extreme poverty by 2030.

County spending on climate change and disaster risk reduction: Evidence from the budgets of four counties

Bristol and the SDGs: Bridging the local and the global