What does the new extreme poverty data show?

New World Bank data leaves our understanding of the distribution of extreme poverty and projections largely unchanged, but confirms past global poverty tar

New World Bank data leaves our understanding of the distribution of extreme poverty and projections largely unchanged, but confirms past global poverty targets were met and future targets remain challenging.

The global benchmark measure of extreme poverty has been revised to use more up-to-date comparisons of prices internationally. These purchasing power parities (PPPs) compare the cost of the same basket of goods and services in different countries to enable comparison between them (see our data blog before the release). They give an exchange rate between dollars and other countries’ currencies that allows people to buy the same basket.

Comparing estimates on the two measures for 2011 shows relatively small changes to the overall extreme poverty level and its regional distribution.

Data for most developing countries for the new measure can now be explored on PovcalNet, the World Bank’s online poverty tool.

Forecasts suggest that the Millennium Development Goal target to halve global extreme poverty rates was achieved well ahead of the 2015 deadline. Using the new measure, 44% of people in developing countries were in extreme poverty in 1990; this is set to fall by almost three-quarters to 12% by 2015. 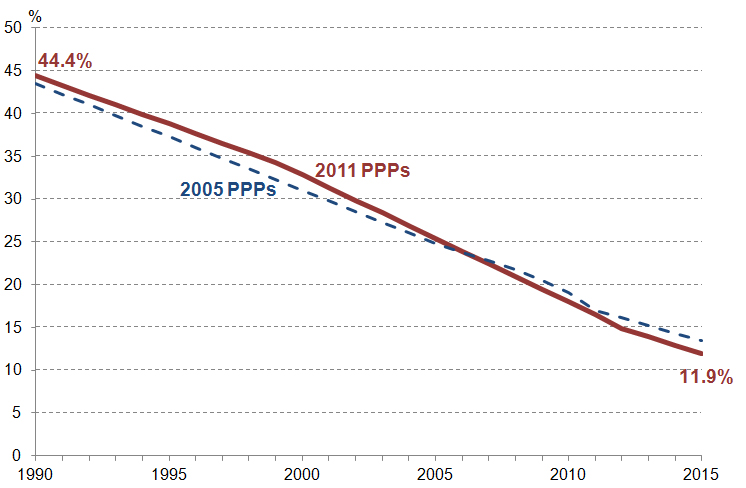 Despite an increasing global population, the actual numbers of people living in extreme poverty look set to fall from almost 2 billion in 1990 to just over 700 million in 2015 – an almost two-thirds reduction.

The Sustainable Development Goals (SDGs) include a target to end extreme poverty by 2030, currently measured as living on less than $1.25-a-day. The new $1.90-a-day measure seems likely to be included as the indicator for monitoring progress towards this target.

Available projections suggest that the general picture is broadly similar on either measure. The 2030 goal remains challenging, yet achievable, on the $1.90-a-day measure. As our Investments to End Poverty 2013 report showed, existing patterns of economic growth are unlikely to achieve this goal alone. This means targeted interventions will be required to help those people who otherwise would be at risk of being left behind. 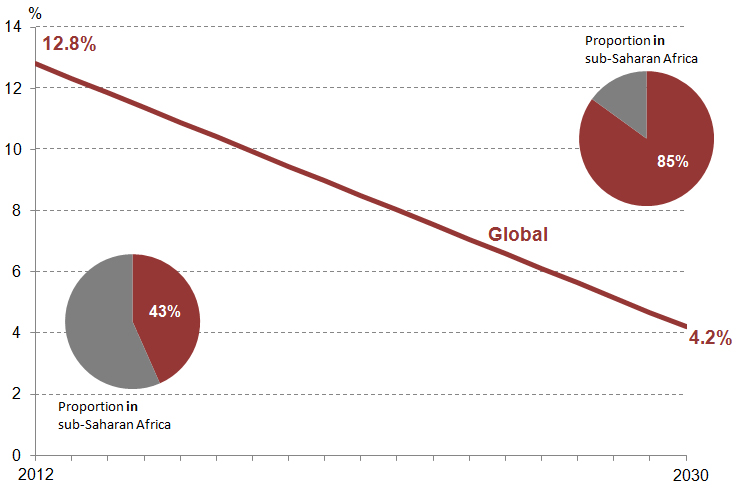 The global extreme poverty measure only considers a single measure of income poverty. But the SDGs include a goal “to end poverty in all its forms everywhere”. The World Bank’s Chief Economist has appointed a Global Poverty Commission to consider how best to measure global poverty in future. This could involve monitoring a range of income thresholds, and broader measures of poverty and deprivation beyond income alone.

For detail on the World Bank’s approach to measuring extreme poverty, see Global Monitoring Report 2015, box 1.1 and PovcalNet, ‘What’s new’ page. For example, poverty estimates for a number of countries are yet to be revised to the 2011 PPP measure, and there are issues with data for the Middle East & North Africa region.

All World Bank unless stated: