What do trends in the UK's aid spending on nutrition tell us?

DI outlines the latest trends in the UK government’s spending on nutrition and contextualises them, answering the question: does DFID remain a top donor when it comes to investing in nutrition?

This is the second in a two-part series that unpacks the latest analysis of investments on nutrition made by the UK’s Department for International Development (DFID). The first blog in the series analysed key trends in the UK's aid spending to tackle malnutrition and the potential impact of Covid-19 on malnutrition and future investments. In this second blog, we take a deeper look at DFID’s nutrition spending at the country level and efforts to mainstream gender into nutrition interventions.

DFID’s total aid spending for nutrition decreased between 2017 and 2018, despite spending on nutrition as a percentage of overall aid expenditure remaining relatively high

DFID’s total aid spending for nutrition decreased slightly from US$944.3 million in 2017 to US$888.4 million in 2018. Spending on ‘nutrition-specific’ interventions (those that address the immediate drivers of nutrition) decreased by 20%, and 2.3% on ‘nutrition-sensitive’ interventions (those that address the underlying or structural drivers of nutrition) from 2017 to 2018. These decreases can be attributed to reductions in spending on existing projects and the completion of others, including some elements which have ended without a replacement. For example, funding disbursements to Turkey stopped entirely with the completion of a nutrition-sensitive humanitarian intervention (Syria Humanitarian Assistance, 2013–2016).

Despite this, DFID’s spending on nutrition accounts for 10.4% of its total aid spending in 2018, which remains markedly higher than levels seen before the 2013 Nutrition for Growth (N4G) Summit.

Figure 1: DFID’s spending on nutrition as a percentage of overall aid expenditure, 2010–2018

Each year brings changes in DFID’s total spending — reflected in changes to the amounts that different countries receive from DFID. The year 2018 saw a continuation of previous patterns, with the largest recipients of DFID’s support, and changes to that support, being largely a product of DFID’s humanitarian programmes. However, in a stark change of direction, the number of nutrition-related projects fell overall by 15 in 2018. This is the largest annual decrease since analysis began in 2010 and represents a reversal to pre-N4G levels.

Due to the nature of humanitarian programmes, such spending is reactive to crises, and often includes nutrition-specific components and discreet nutrition objectives. They are typically also focused on undernutrition and providing lifesaving supplies to countries suffering severe levels of malnutrition as a result of war and climate change. As the 2020 Global Nutrition Report points out, for funding to be equitable, it must respond to needs and its volumes should be proportionate to the severity of the form of malnutrition.

While funding to Yemen has dramatically increased — the largest increase in funding for nutrition for any country from DFID in 2018 — funding has decreased substantially for the Syrian Arab Republic, Kenya, Pakistan and Uganda amongst others. The largest reduction in funding (of US$32.5 million) was felt by Somalia, with the end of the multi-year humanitarian programme that ran from 2013 to 2017. Similarly, there are no replacement programmes for some other large investments which have ended or are ending.

Mapping exercises like the detailed country studies carried out by the Emergency Nutrition Network, partly funded by DFID, are crucial to identify opportunities for more investment in the transition to longer-term, development-focused nutrition support. However, while a transition to longer-term nutrition support is crucial, continuing to include discreet nutrition objectives in DFID’s humanitarian programming could help sustain nutrition-sensitive spending levels and support nutrition outcomes in fragile contexts.

Likewise, and as stressed in the 2020 Global Nutrition Report, mainstreaming nutrition into health and food systems is crucial to protect populations against epidemics and save lives. While the concept of universal health coverage has been gaining traction, analysis shows that DFID's nutrition-related disbursements have typically represented less than 20% of their total health spending, and that total health spending has remained constant. 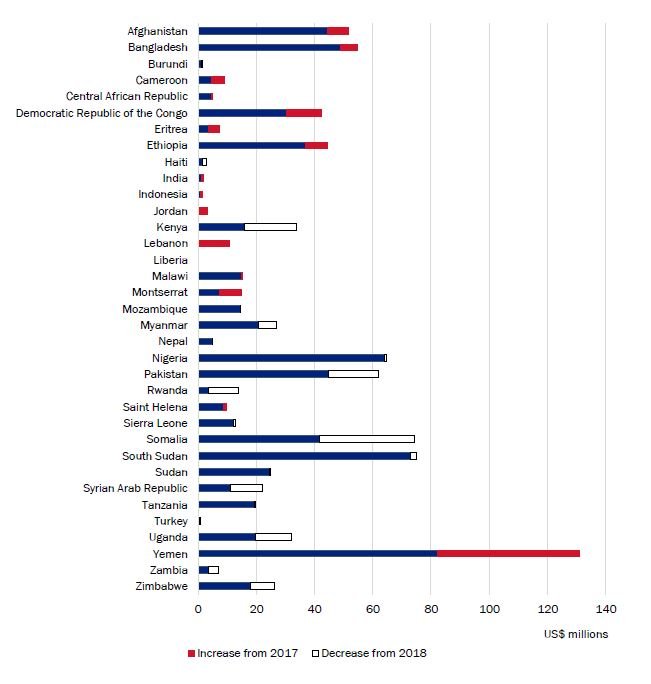 DI’s analysis also sheds light on a positive trend in DFID’s nutrition spending that has a focus on equality, with the vast majority of DFID’s commitments for nutrition now including gender equality policy objectives: 95.2% of DFID’s nutrition-sensitive commitments include such objectives, while this is true for 96.1% of nutrition-specific commitments. This is crucial because girls and boys, and men and women, can have differential access to food, depending on their socially constructed gender roles. For example, women and girls often eat last and have the least choice, affecting their ability to do well in school and earn a good living.

Figure 3: Percentage of DFID’s nutrition commitments that are gender-relevant, 2015–2018 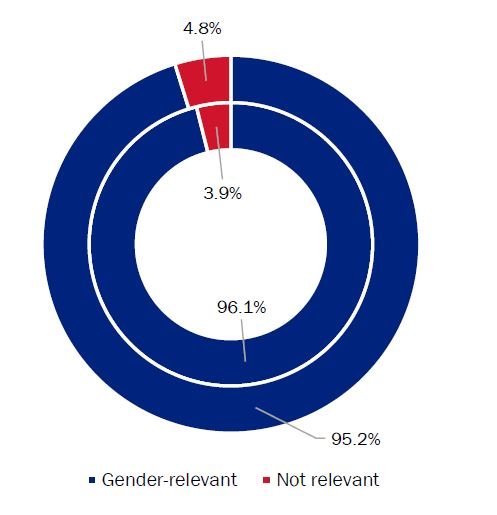 Does DFID remain a top donor?

This has remained the case since 2016, with the UK’s spending on basic nutrition being higher than that of the US, Canada, Germany and the Netherlands, among others. In this sense, DFID is living up to its legacy and promise to make global nutrition a continued priority. However, more needs to be done to widen the focus of funding from a concentration on undernutrition and short-term responses, towards a more balanced and longer-term approach that funds interventions to tackle all forms of malnutrition, including overweight and obesity.

Decreases in funding to nutrition by DFID and other donors, including the US, raises questions around the viability of sticking to traditional funding to meet global nutrition targets. It also highlights the need to diversify funding and widen commitments beyond funding alone, in order to ensure that tackling malnutrition in all its forms — including overweight and obesity — remains a top priority.

As the first blog in this series made clear, the upcoming Tokyo N4G Summit offers an unmissable opportunity for donors and other stakeholders to capitalise on the achievements made through the N4G process to date. It is also a pivotal moment for world leaders to make new, bold nutrition commitments that support a pro-equity agenda, so that all people can survive and thrive. Investing in nutrition, renewing and expanding commitments, and strengthening accountability has now become urgent if we want to prepare our systems for future shocks, and avoid a reversal of gain.

This analysis was conducted as part of Development Initiatives’ work under the MQSUN+ consortium.

MQSUN+ is supported by UKaid through DFID; however, the views expressed do not necessarily reflect the UK government’s official policies. MQSUN+ cannot be held responsible for errors or any consequences arising from the use of information contained in this blog.

Share What do trends in the UK's aid spending on nutrition tell us?

DI explores the latest trends in the UK government’s spending on nutrition and looks forwards, considering the potential impact of Covid-19 on malnutrition and future aid investments.

Why equity is critical to tackling malnutrition

Harpinder Collacott and Charlotte Martineau explore how equity in food and health systems is crucial to reducing inequalities in nutrition outcomes.