Official development assistance (ODA, or aid) is a critical resource for improving nutrition outcomes in developing countries. It can target those most in 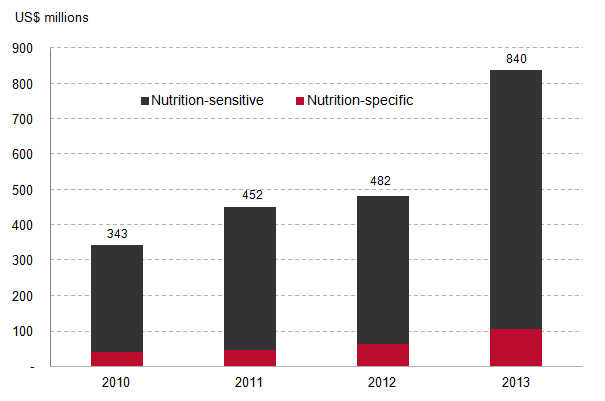 Official development assistance (ODA, or aid) is a critical resource for improving nutrition outcomes in developing countries. It can target those most in need, address their immediate requirements and combat the underlying determinants of poor nutrition in the longer term.

Tracking donor ODA for improving nutrition is important to understand how much they spend and where these resources go, for leveraging additional investments from other actors, and to facilitate accountability at all levels.

Tracking is also a challenge. Most approaches begin with the Organisation for Economic Co-operation and Development (OECD) Development Assistance Committee (DAC) Creditor Reporting System (CRS), to which DAC member countries report their ODA spending in detail using prescriptive ‘sector’ and ‘purpose’ categories and codes. These allow the identification of nutrition-specific interventions. To identify and track donor spending on broader nutrition-sensitive interventions, there have emerged various efforts to capture other relevant activities amongst the established CRS reporting system. Perhaps the most widely endorsed approach for doing so is the SUN Donor Network approach, used here and adopted by several donors to report spending to the Global Nutrition Report.

The accurate tracking of all donors’ spending plays a vital role in combating malnutrition by increasing accountability and providing essential knowledge to better allocate resources. The picture on who is spending what, where and when on nutrition should continue to improve. This could be achieved by better reporting by donors, clearer information on domestic public resources and more accountability from other public and private sources of finance.

For more detail on this methodology and for more findings, see DFID’s aid spending for nutrition: 2013.

Whilst this analysis gives insight into DFID’s nutrition spending, it is not able to consider the degree to which different nutrition-specific or nutrition-sensitive actions are effective at improving nutrition outcomes.

All values are based on ODA disbursements and presented in constant 2013 prices.