Percentage of humanitarian funding directly channelled through local and national NGOs is low, and falling

In 2014, non-governmental organisations (NGOs) received 18% of the total humanitarian funding reported to the UN Office for the Coordination of Humanitaria

In 2014, non-governmental organisations (NGOs) received 18% of the total humanitarian funding reported to the UN Office for the Coordination of Humanitarian Affairs (OCHA)’s Financial Tracking Service (FTS).

Local and national NGOs together received only US$46.6 million (1.2% of the total given directly to NGOs) in 2014, having declined from a peak of US$58.0 million in 2011. This represents 0.2% of the total humanitarian assistance reported to the FTS in 2014, compared with 0.4% in 2012. It is likely that they received significantly more indirectly, as sub-grants from international agencies, but the data does not review how much this amounted to. 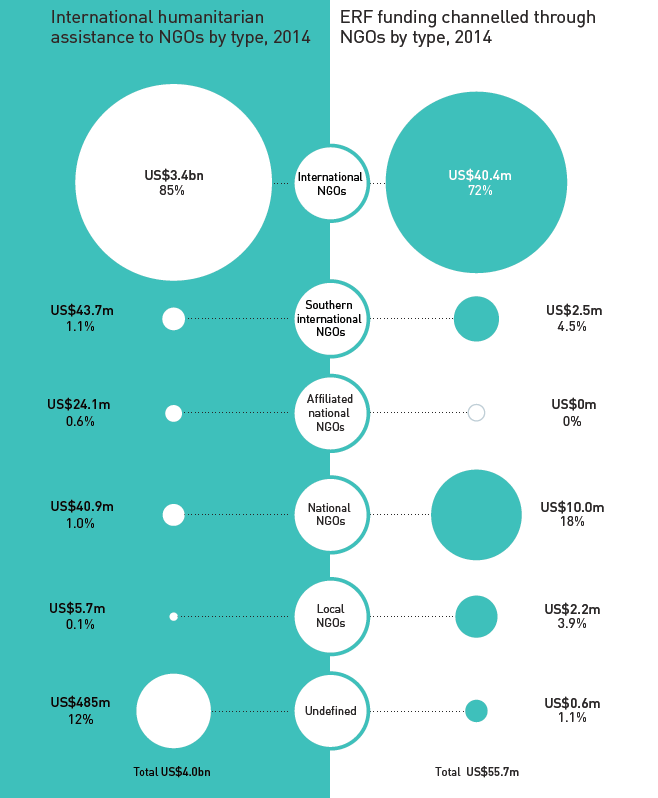 This infographic was developed for our Global Humanitarian Assistance Report 2015

While emergency response funds (ERFs; country-based pooled funds) were designed to be accessible to local actors, and indeed the majority of ERF funding has been channelled through NGOs over the past five years (57%), only 21.9% of this was channelled through local and national NGOs in 2014.

Share Percentage of humanitarian funding directly channelled through local and national NGOs is low, and falling