In part 1 of this blog series, we looked at the rule changes around measuring loan concessionality and some possible implications of these. This second par

This two-part blog series unpacks the outcome of decisions on how aid loans are counted, using new data, and highlights some elements that need to be closely watched.

In part 1 of this blog series, we looked at the rule changes around measuring loan concessionality and some possible implications of these. This second part examines the possible impact of these changes on the overall levels of official development assistance (ODA) reported by donors.

Including repayments of ODA loans in the total aid figures

To understand this impact we need to note that the changes in measurement of concessionality are accompanied by a change in the way that loan repayments are treated. Under the new rules, the headline ODA figures will not be adjusted for capital repayments from recipients of loans. Essentially, donors will no longer subtract loan repayments from their headline ODA figures. This may not seem an earth-shattering change, but looking at how this works in practice hints at concerning long-term implications.

Using 2014 data on ODA from the Organisation for Economic Co-operation and Development (OECD) Development Assistance Committee (DAC) Creditor Reporting System (CRS), we estimated the change in the amount of ODA reported by each donor due to these new rules (see table). It is clear that the rule changes could have a significant impact on headline figures of reportable ODA from some key donors, whether or not the levels of aid transferred to poor countries from these donors actually increases or decreases. Main changes are as follows: 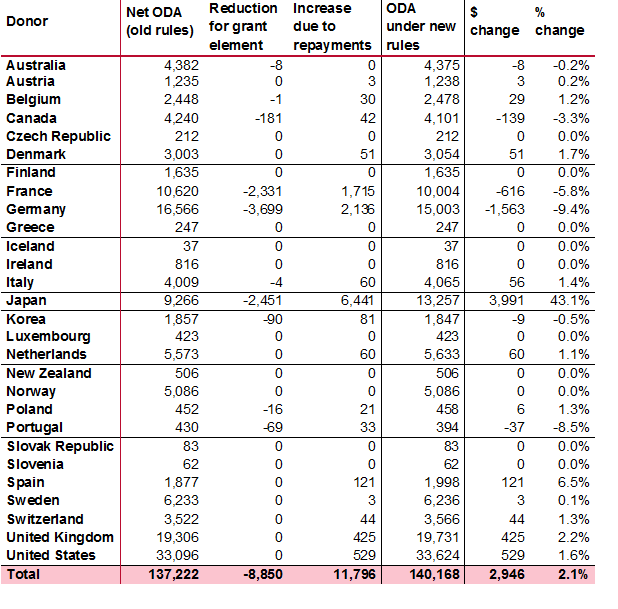 Risk of incentivising use of loans above grants

Importantly for developing countries, therefore, the new rules may, in the long run, incentivise the increased use of loans as a financing tool over grants, as donors seek to maximise headline reportable ODA figures. As we noted in part 1, this could incentivise the use of loans in country contexts where loans may be less appropriate. (The rule changes also make things very confusing for stakeholders who want accurate figures on ODA volumes from certain donors over time, as the new reporting directives are phased in and the old ones phased out. This is a broader aspect of the ODA modernisation project as a whole that everyone will have to grapple with.)

One to watch: ODA loans to the private sector and ‘risk premia’

A final important area (still to be fully worked out by the DAC) is ODA loan arrangements that involve the private sector and the related issue of ‘risk premia’ for donors giving ODA loans. There is some back-story to these ‘risk premia’: Increasingly, donor countries are keen to use ODA for ‘catalysing’ or mobilising private investments in development. Some have been pushing to receive recognition for investments made through, for example, development finance institutions and export–import banks, via private sector instruments (PSIs)[2]. These investments in private entities, as they are non-concessional, are not currently reportable as ODA.

However, the new directives outlined in the of the DAC 2016 High Level Meeting Communiqué indicate that some PSI expenditure, if sufficiently ‘developmental’, may now count as aid (see Annex 1 . This relates to ODA loans in that the Communiqué states that the DAC is working to propose a ‘risk premium’ in the discount rate to further incentivise use of PSIs by donors, which may have ‘little or only a purely technical concessionality threshold’. Though we’d need more information to be sure, what this might mean in practice is that donors giving PSI-related funding may be able to count this as ODA, despite the loan having less concessional terms than a straightforward ODA loan to a government. This could have problematic consequences of incentivising fewer concessional loans – and grants – to governments, and direct more ODA as a whole to private companies (as Eurodad notes). While in principle, incentivising more private investments in sustainable development makes sense given the scale of the investment gap in developing countries, there is a lack of transparency and accountability, with little available evidence of the developmental impacts of PSI-type investments. While the DAC has also begun work to improve reporting at the activity level of PSIs, it seems assessments of the developmental value of PSIs may come down to self-reporting and peer review, which may not allow for enough independent oversight.[3] These reporting standards need to be developed openly and in consultation to ensure that they are robust, transparent and provide the necessary information on developmental (development-effective financing mechanisms should, in principle, stimulate investments that would not otherwise have been made (financial additionality), or influence the business model to follow a more development-friendly approach (operational additionality). There is not yet any common accepted framework for assessing additionality.

Stakeholders will need to watch closely as the changes are rolled out and reporting guidelines developed, and keep participating actively in the debate. The proof of these rule changes, as ever, will be buried in the data.

[1]Grace period refers to a number of months or years at the start of a loan before the borrower starts to make repayments.

[2] The term ‘private-sector instruments’ refers to loans, guarantees, mezzanine finance and equity provided to enterprises in developing countries. Such instruments are used by development finance institutions and other financial intermediaries such as export–import banks or investment funds, but also by development banks, aid agencies or directly by treasury departments of donor governments. They are usually extended at non-concessional terms for investments for which economic returns are possible, but not yet sufficient, to attract private investment.