Budeshi is a living platform that demonstrates the utility of the OCDS, and it is based on the latest version of the OCDS schema at every given point.

This is a guest blog written by Seember Nyager, CEO at the Public and Private Development Centre (PPDC) in Nigeria

Budeshi is a living platform that demonstrates the utility of the Open Contracting Data Standards (OCDS), and it is based on the latest version of the OCDS schema at every given point. By working very closely within the Open Contracting Community, and with a commitment to research, Budeshi seeks to continuously respond to local user needs for engaging and interacting with [OCDS] data; thus contributing to the adoption and advancement of the OCDS. On a broader scale, Budeshi which translates to “Open It” makes the case for what we stand to achieve by collectively deploying “Joined-up Data Standards” rather than every data-owning and controlling agency working in silos. It is for this reason that we welcome the Consultation Paper on Joined-up Data Standards as a starting point on moving the discussion on data interoperability from principles to practice.

Our need for Budeshi arose from the challenges faced by procurement monitors, who observe and report on the process through which public contracts are awarded and executed. One of such challenges was experienced in monitoring the contracting process for the construction of primary health care centres (PHCs) across Nigeria. At first it was difficult to access procurement records such as plans, tender documents, contract award documents for the construction of these PHCs. After several Freedom of Information (FOI) requests, procurement monitors eventually received some of these procurement records, but then it became difficult to link the data in the plans to the data in the contract award documents because the records at each stage were provided by different Government units, in different formats, and there was no mechanism to link data at any given stage to the next stage. The result of the data incoherence meant that no one process, from project conception to contract award and ultimately to public service delivery, could be adequately followed through from start to finish. Rather, the pre-contract award stage was monitored separately from the project monitoring stage. So although data was gathered throughout the pre-contract award stages, it did not provide any utility for finding out whether executed contracts were good value for money or were built based on identified needs and specifications at the stage of project monitoring.

Expectedly, the inability to link data across stages continued to affect monitoring results because it was impossible to uniquely identifying any contracting process and its specific features from conception to eventual service delivery. It was impossible to compare budget estimates to eventual contract awards, to compare PHCs with the same specifications or to generate red flags that could prevent project failure or to link contracts that have the same budget source. The efficacy of having a legal provision for citizens to observe and report on every procurement process did not seem to have any effect since the data trail was not clear enough to be followed.

Given our familiarity with the challenge of data incoherence, we very quickly recognized the value of the Open Contracting data standards to changing this narrative. And so by developing our local platform called Budeshi, we have been able to demonstrate what a more integrated contracting process would look like. For procurement monitors, this means that more meaningful monitoring exercises can be achieved. 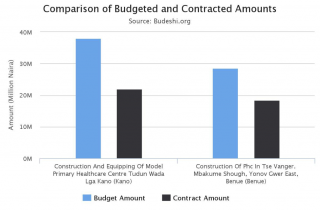 However, Budeshi as a standalone independent platform cannot be sustained if the systems that generate data on public contracting do not support its existence. Public contracting data is generated from the public sector, whose duty it is to provide public services. In fact, the rigour of having to request for data and then convert it to the OCDS before any meaningful monitoring can be undertaken is indication that the reforms required to ensure data coherence go deeper than deploying a civic tech platform.

Thus, we keep reminding ourselves that Budeshi was primarily set-up to demonstrate to the Nigerian Government and to every other Government that so desires, how and why the OCDS serves as a useful framework to link budget and procurement data to public services. Budeshi was never intended to take over the responsibility of Government and if data would support Government decision making, coherence and interoperability of data is a necessary step that must be adopted within the public sector. And it is in the adoption and implementation of the OCDS within Government that Budeshi derives its true success. Whilst implementation of the OCDS is yet to be achieved in the public sector, we are holding the Government to its commitment to fully implement the OCDS.

The implementation of the OCDS is only representative of a broader public sector need for data interoperability; and the consultation paper on Joined-up Data Standards is a timely reminder that data would better support sustained development when it is capable of serving both local needs and feeding into larger, more global data structures. This is no small feat, but the courage of investing in these efforts may well be our key to unlocking all the benefits that the SDGs promise.