Is Elgeyo Marakwet County allocating resources to the health sector according to its health needs?

Using our Spotlight on Kenya, we explore the needs and resource allocations in the health sector in Elgeyo Marakwet County.

Matching available public resources to citizens’ needs – such as health – is critical to improving development outcomes and reducing poverty. And to allocate resources effectively, access to timely, accurate and disaggregated data on needs is key. Such data equips decision-makers to prepare effective development plans to guide provision of public services. Quality data is also needed to monitor the impact of public spending on development outcomes.

We can use our online tool, Spotlight on Kenya, to look at the needs and resource allocations in the health sector in Elgeyo Marakwet County in Kenya. This is to understand whether resources are allocated according to need, but also where data must improve to draw such conclusions. We focus on this county as it is about to embark on developing its second 5-year County Integrated Development Plan (CIDP).

What does the data tell us about health needs in Elgeyo Marakwet County?

According to the Socio-Economic Atlas of Kenya 2014, Elgeyo Marakwet County has a population of 369,998 people with 2.8% of the population living with disability. Over half of people (52.7%) are living in poverty. Elgeyo Marakwet County has 54 nurses per 100,000 people and 5 doctors per 100,000 people. On maternal health, 43.6% of married women (15–49 years) use modern contraceptive methods and so interventions are needed to ensure improved use of such in the county. Skilled personnel attend 65% of births, which is above the national average of 57.8%. However, maternal health needs are not yet being met in the county since every birth should be attended by skilled personnel.

Looking briefly at immunisation and infections, the proportion of one-year-old children immunised against measles (86.6%) in the county is slightly above the national average of 86.3%. Nonetheless, there are regional variations in immunisation coverage with regions such as Kerio Valley being left behind. Respiratory infections, pneumonia, skin infections, diarrhoea and intestinal worms account for over 75% of diseases reported by outpatients in the county. This underscores the need for improved provision of preventive and promotive health services since these diseases are controllable. Finally, there are nutritional needs with approximately 45% of women of reproductive age suffering from anaemia and vitamin A deficiency affecting over 30% of under-five-year-old children.

What does data tell us about health spending in relation to the county’s health needs?

Expenditure data for 2015/16 and 2016/17 indicate that health is the priority sector in terms of budgetary allocation in Elgeyo Marakwet County. The sector accounted for 35% of the county’s spending in these two financial years (Figures 1 and 2). 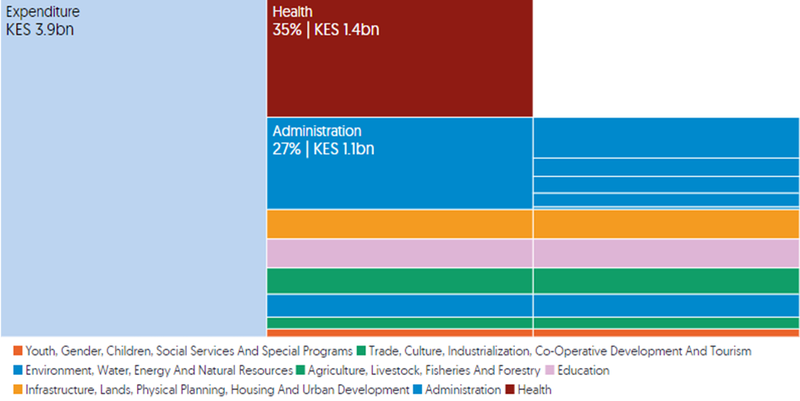 Source: DI, based on Elgeyo Marakwet County’s budget for 2016/17 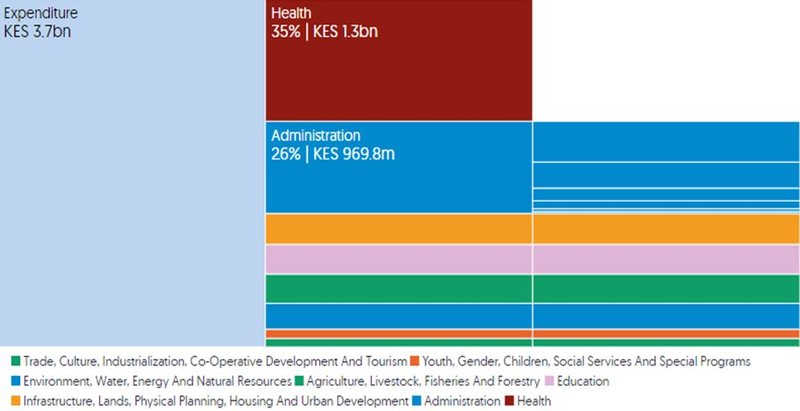 Source: DI, based on Elgeyo Marakwet County’s budget for 2015/16

A closer look at the expenditure data reveals that planning and administrative services accounted for 76.4% (Ksh 986.4 million) and 81.8% (Ksh 1,120.6 million) of the health sector budget in 2015/16 and 2016/17 respectively. This is made up of health administration (staff-related costs), health monitoring and information management, and health sector support costs. Salaries and wages accounted for over 70% of the health budget in 2015/16 and 2016/17. The backdrop of this is perhaps the county’s commitment to improve the quality and quantity of human resources in the health sector.

The critical role of data in ensuring needs are met

Enhancing health outcomes requires better targeting of resources, which can be achieved if access to quality data on spending on specific health services such as immunisation and malaria prevention, as well as health indicators, is improved. Such data will facilitate analysis and identification of services that should be prioritised in budgetary allocation. Thus, county decision-makers should invest in regular collection and use of quality data to ensure needs are met through effective resource allocation.

Share Is Elgeyo Marakwet County allocating resources to the health sector according to its health needs?