Agenda 2030 and the Sustainable Development Goals have brought us a global commitment to end extreme poverty and ensure no one is left behind. For this amb

“Poor health is not simply a consequence of poverty, it is profound cause. Millions of households are only one illness away from chronic poverty.” Anirudh Krishna

Agenda 2030 and the Sustainable Development Goals have brought us a global commitment to end extreme poverty and ensure no one is left behind. For this ambition to be met, we need to know who the poorest people in the world are, understand their lives, and ensure they are included in progress. The P20 Initiative is a project focusing on the people who are in the poorest 20% globally. It aims to track their progress and improve information about their lives in order to ensure no one is left behind in efforts to tackle poverty. This briefing focuses on health.

The state of maternal and child health (itself a measure of a functioning health system) is fundamental to the progress for the P20. Data that allows us to pinpoint those being left behind is limited, but that which exists show that the P20 are at a disadvantage.

Agenda 2030 is about fighting poverty and making meaningful progress across key sectors. In order to ‘leave no one behind, we have to know who is included in progress in each sector – and who is left out.

Improved health is fundamental, but the data used to measure progress under Agenda 2030 focuses on national prevalence; it does not identify the people or places in greatest need. Data on maternal mortality is not comprised of headcounts but rather is modeled using GDP per capita, fertility rates and skilled birth attendance.  These averages make it impossible to identify who is benefitting from progress.

Survey data tells a bit more about who benefits. In the P20, just 36% of all children had a skilled birth attendant present at birth – compared with 74% in the rest of the population. (Skilled birth attendants can reduce infant mortality by 43%[1] and prevent two-thirds of all maternal deaths.)[2] 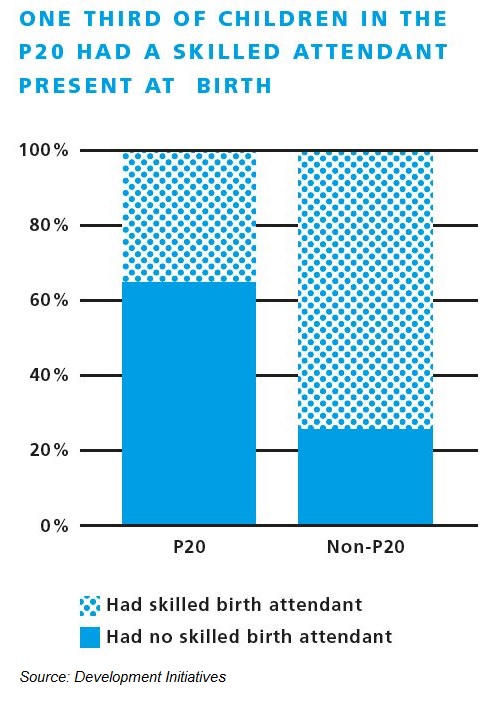 Survey data has also revealed that women in the P20 are three times as likely to have had a sister who has died in childbirth than women in the rest of the population.

The P20 Initiative will monitor the progress on health outcomes and on the disaggregated data that can enable policies and resources to be targeted to those furthest behind. It will support the Sustainable Development Indicators for Goal 3 on maternal and under-five mortality.

Quote: One Illness Away: Why People Become Poor and How they Escape Poverty, Anirudh Krishna

[1] Ending Newborn Deaths: Ensuring Every Baby Survives. Save the Children. 2014