Agenda 2030 and the Sustainable Development Goals have brought us a global commitment to end extreme poverty and ensure no one is left behind. For this amb

Agenda 2030 and the Sustainable Development Goals have brought us a global commitment to end extreme poverty and ensure no one is left behind. For this ambition to be met, we need to know who the poorest people in the world are, understand their lives, and ensure they are included in progress. The P20 Initiative is a project focusing on the people who are in the poorest 20% globally. It aims to track their progress and improve information about their lives in order to ensure no one is left behind in efforts to tackle poverty. This briefing focuses in on gender.

Some of the poorest people are disadvantaged more than others due to their gender or identity. For example, women and girls have been, and remain, disadvantaged in many areas  ̶  what they earn, the work they do, their ownership of property, chances of schooling and of being heard. And the exclusion suffered by the lesbian, gay, bisexual and transgender community is becoming increasingly evident.

Ending poverty in all its forms and leaving no one behind means ensuring that someone’s gender or other aspect of their identity never leaves them in poverty or causes them to suffer discrimination or exclusion.

More timely, gender-disaggregated data means we can measure whether the poorest women and girls,  the many young men without employment and opportunity, and people at risk of exclusion as a result of gender identity or sexuality are being listened to, reached with services and sharing in growth.

The chart below illustrates just how critical it is to have disaggregated data. It shows the significant gap between the numbers of women and men who have completed primary education. It also shows that both girls and boys in the P20 are much less likely to complete primary school than the rest of the population. The disaggregated data we have for education is not available for most other sectors. Data disaggregated by age and gender means we can get a better picture of who is and isn’t getting access to services and opportunity. Disaggregation by geography means services can then be targeted to those people who need them most. 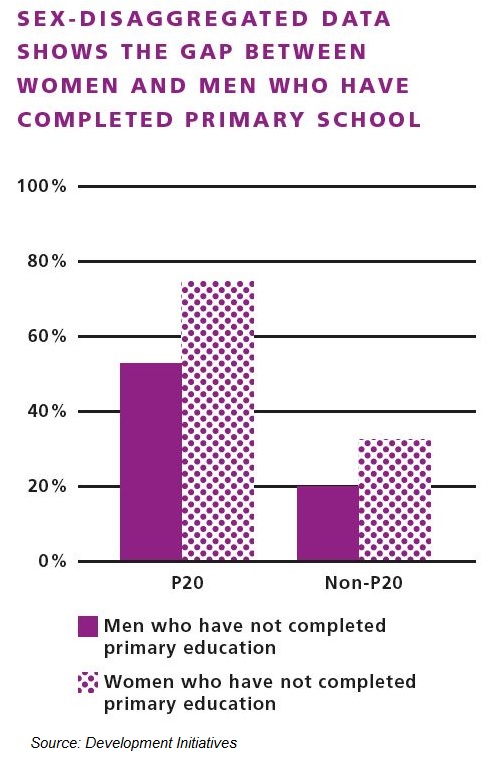 Surveys that measure wealth at the household level often mask disparities between people within a household. Not everyone has equal access to family resources – women, older or disabled people are often bypassed. And just as within households poverty can be invisible, within communities and countries some of the poorest people can be excluded from surveys because of some aspect of their identity or because they are not living in households but are either homeless or in an institution.  The challenge for the Data Revolution is to deliver – at a minimum – data on all people disaggregated by income quintile, geography, gender, age and disability (QGGAD). That data can underpin efforts to empower women and support policies that target other people who are held back from progress.

Read more about our P20 Initiative