In this factsheet we provide an overview of key trends in official development assistance (ODA) emerging from the provisional 2017 Organisation for Economic Co-operation and Development (OECD) Development Assistance Committee (DAC) data release.

The US, Germany and the UK provided the most net ODA in 2016 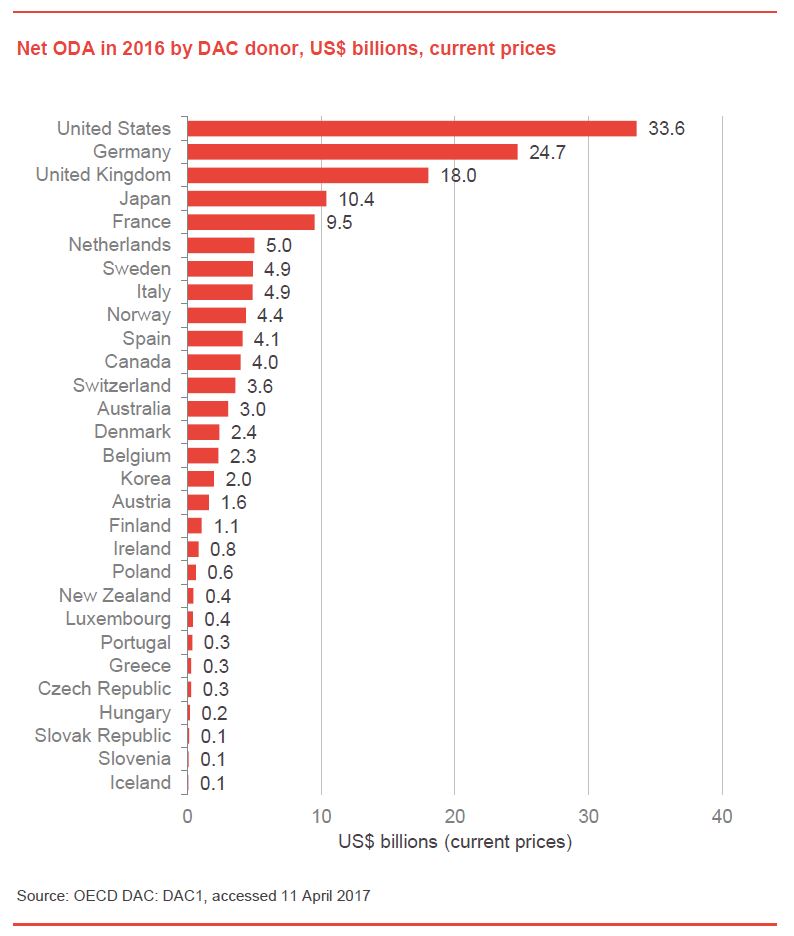 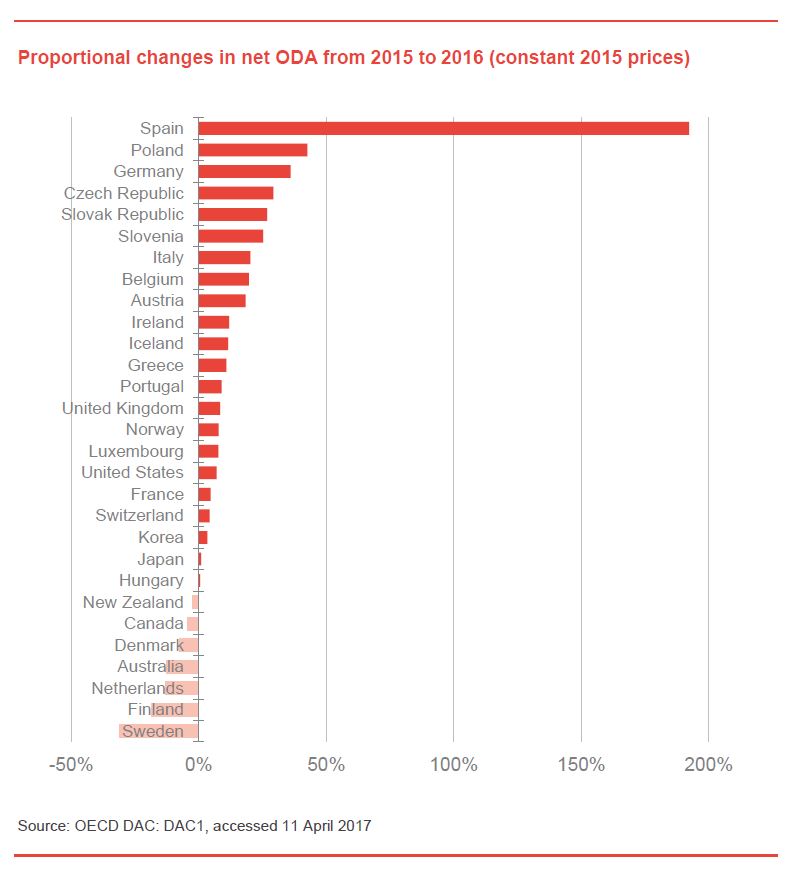 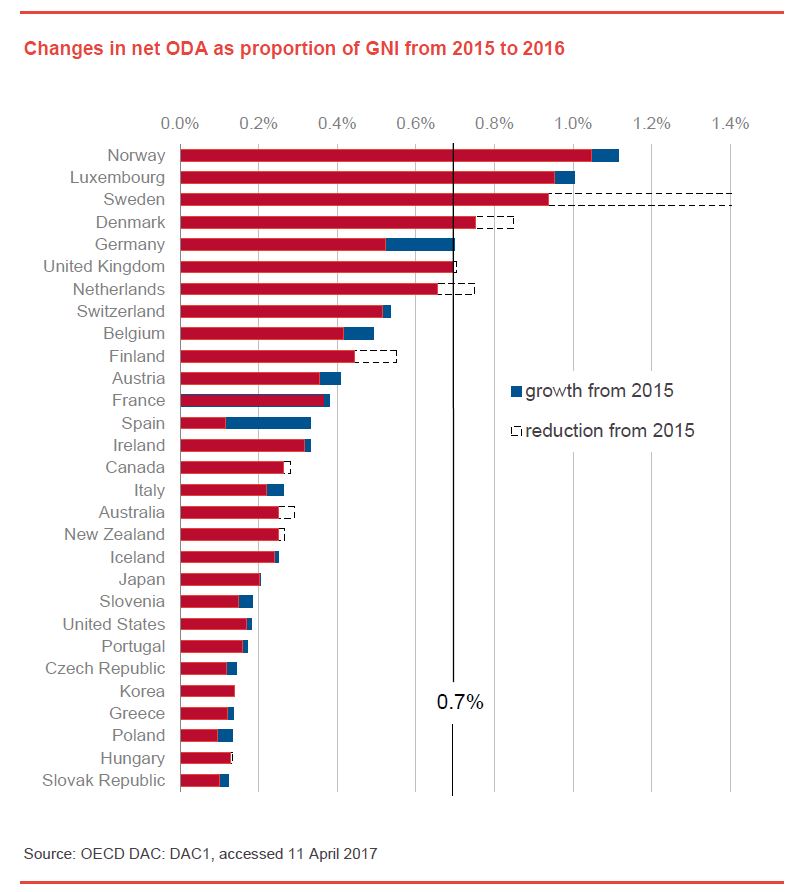 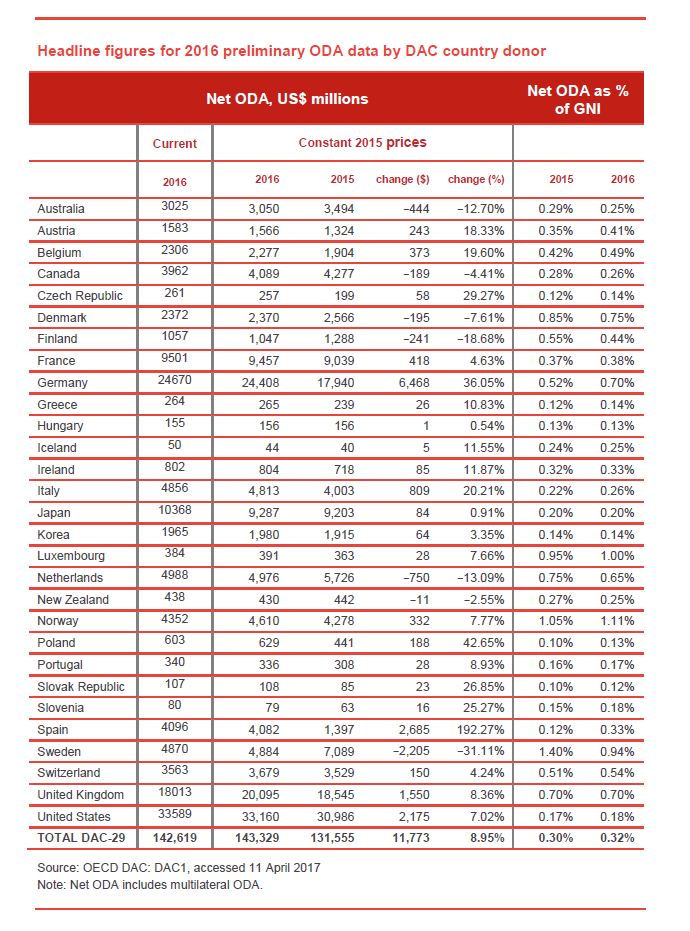 The costs of hosting refugees reported as ODA increased, as did other forms of ODA 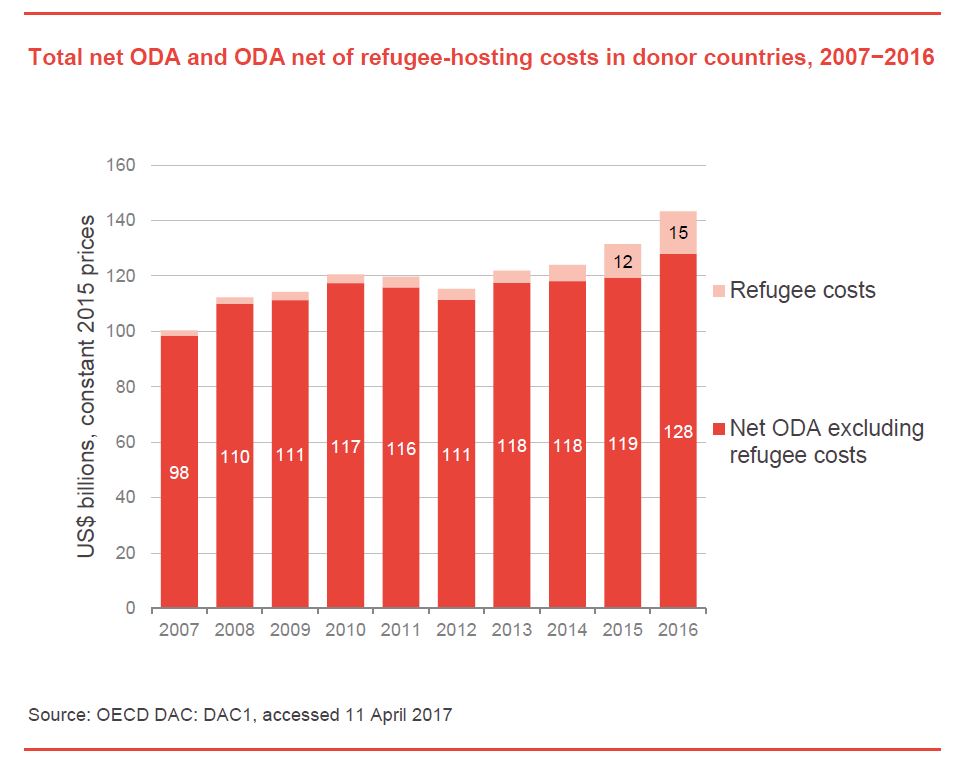 Bilateral ODA to LDCs fell from last year, and most donors are still missing international targets 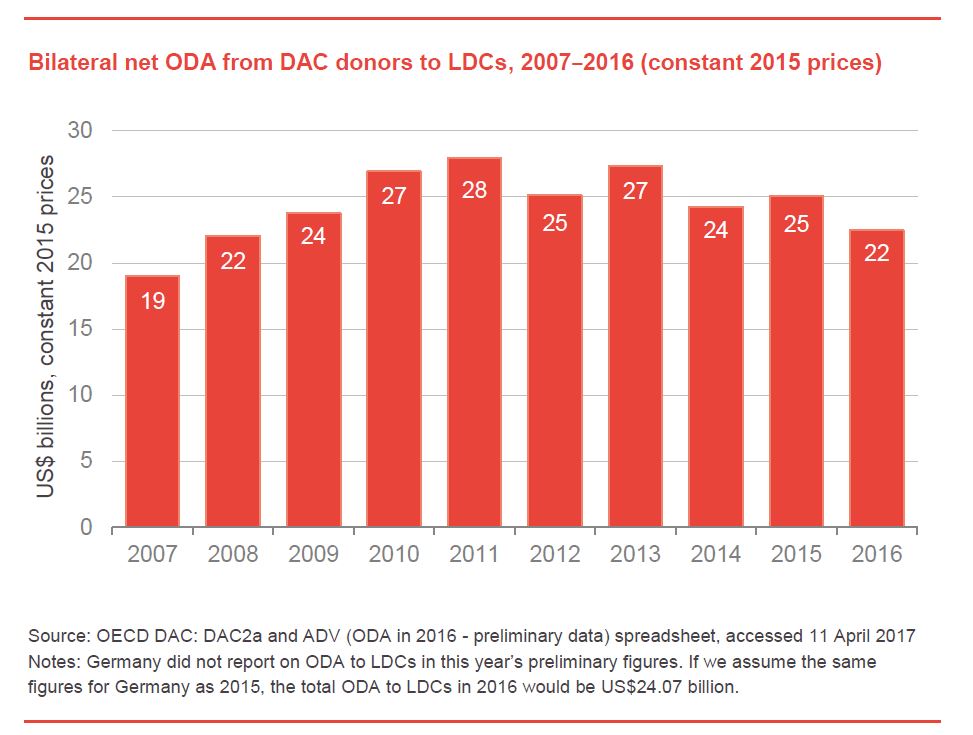 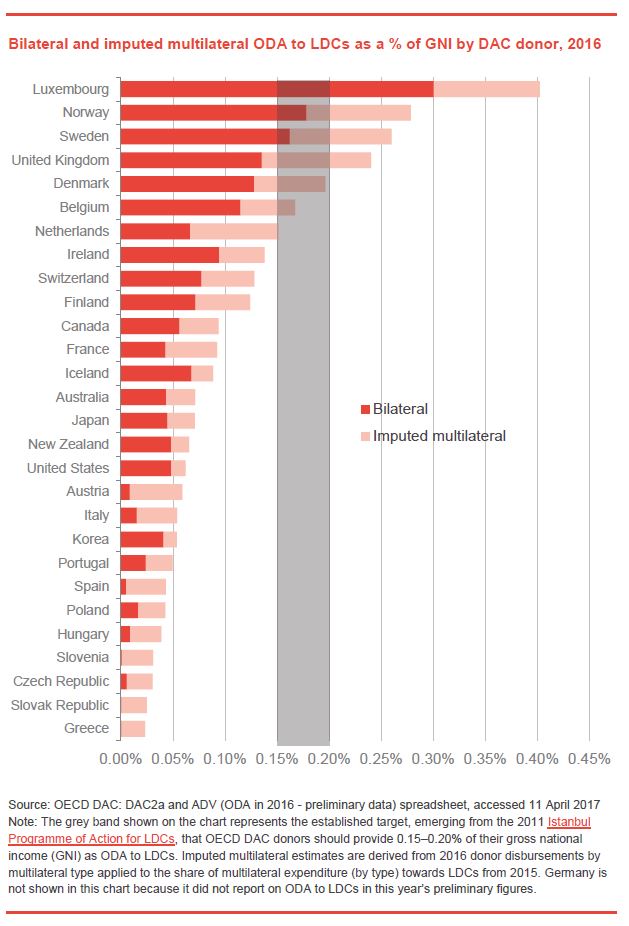 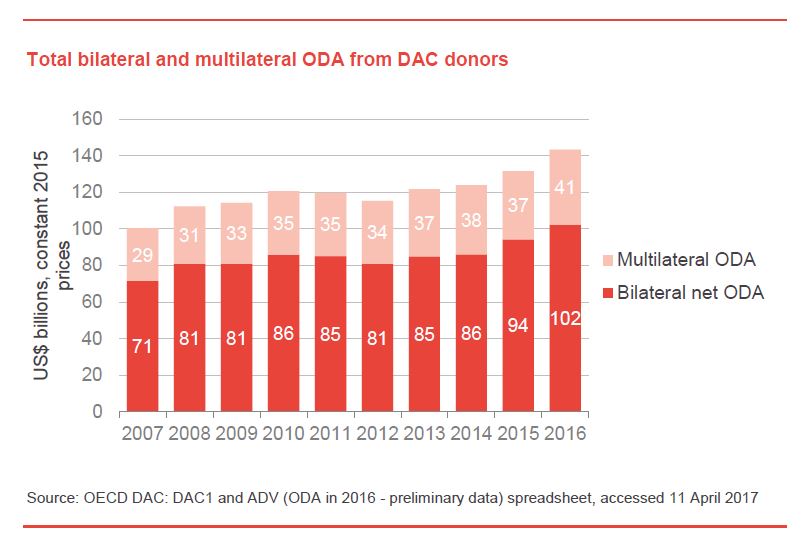 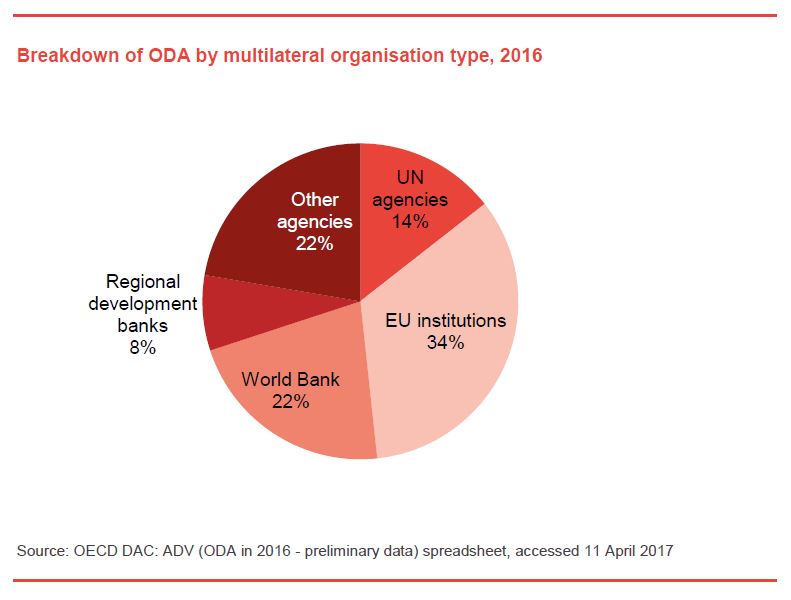 [1] Headline figures shown are provided in current and constant prices, all trend analysis data is shown in constant 2015 prices to allow for comparison with previous years. Data is converted into constant 2015 prices through the application of OECD DAC US$ deflators. The deflators are used to account for inflation and exchange rate variations (between national currency and US dollar). For more information see: http://www.oecd.org/dac/stats/informationnoteonthedacdeflators.htm

[2]Germany did not report on ODA to LDCs in this year’s preliminary figures. If we assume the same figures for Germany as 2015, then the total aid to LDCs in 2016 would stand at US$24.07 billion.

[3]The ordering of the largest donors is by data in current prices; ordering in constant 2015 prices would result in Japan having a lower net ODA value that France due to the effect of national inflation and currency exchange rates.

[4]For comparability purposes the percentage change from 2015 to 2016 in total gross ODA loans is calculated from data in constant 2015 prices. The significant difference between the figure for 2016 in current prices and in constant 2015 prices exchange rate can be predominantly attributed to variations between Japanese Yen and US dollar.

[5]Recognising these challenges at a time where reported costs are increasing, the OECD has established a DAC Temporary Working Group on Refugees and Migration to produce guidance to improve member’s practices in reporting in-donor refugee hosting costs. It draws on findings of a DAC member’s survey undertaken in order to better understand current reporting practises. It is anticipated that there will be an agreement on clarified reporting terms by July 2017, and political endorsement at the DAC High Level Meeting in October 2017.

[6]Data provided on ‘grant equivalents’ (following the rule changes recently agreed by the DAC) have not yet been published. The above figures are therefore based on the existing loan reporting rules. We are told that the DAC hopes to have calculations for loans data using the new reporting rules later in 2017.