So far, only five countries have met or exceeded the target set by the UN General Assembly in 1970 for developed countries to give 0.7% of their GNI in ODA

The commitment to give 0.7% of national income in aid was first made in 1970.

In October 1970, the UN General Assembly adopted a resolution including the goal that: “Each economically advanced country will progressively increase its official development assistance […] and will exert its best efforts to reach a minimum net amount of 0.7% of its gross national product […] by the middle of the Decade.” DAC members generally accepted the 0.7% target, at least as a long-term aim, with some notable exceptions. The US stated that it did not subscribe to specific targets or timetables, although it supported the resolution’s more general aims. Also, Switzerland – which joined the UN in 2002 – did not adopt the target. Prior to 1993, gross national product (GNP) was used, but a change to international economic accounting saw this substituted with gross national income (GNI).

Only six countries have ever met the target, and the OECD average has never exceeded 0.4%.

Sweden, Norway, Luxembourg, Denmark and the Netherlands have all consistently reached or exceeded the 0.7% target.

While many countries have not met the original 0.7% commitment, some have made various national commitments to reach this or other levels. For example, the EU has pledged to meet 0.7% by 2015, while Australia has pledged to reach 0.5% by 2017/2018 (though the recently elected government is yet to announce its plans).

Sweden, Norway, Luxembourg and Denmark have also consistently exceeded their own national targets (of 1%). By contrast Greece, Italy, Spain, Japan and the US give less than 0.2% in aid – as does Korea, although it only joined the DAC in 2010 and has set a national target of 0.25% by 2015. 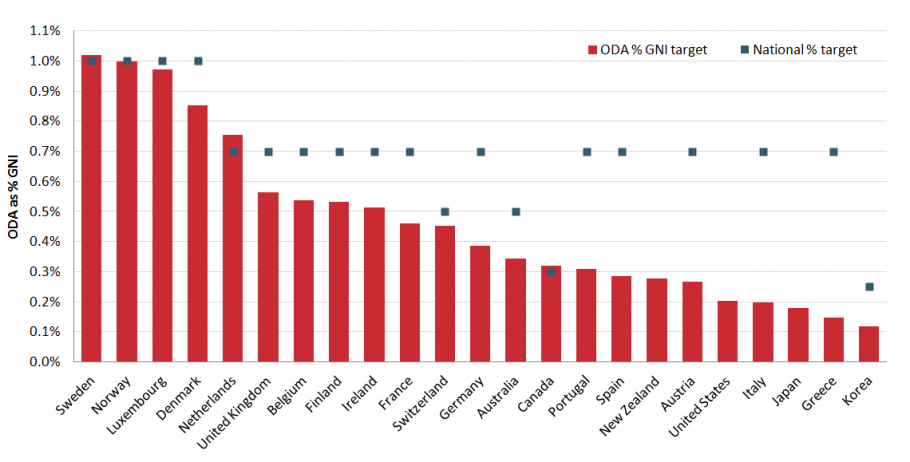