Will discussions on DRR financing materialise in Sendai?

The World Disasters Conference on Disaster Risk Reduction (DRR) opens this weekend in Sendai, Japan. Government representatives from over 100 countries will gather with DRR experts and practitioners, to discuss the future of DRR. The conference is the culmination of months of discussions and negotiations in drafting a new international framework for DRR to succeed the 2005 Hyogo Framework for Action (HFA). It also marks the beginning of an 18-month period of global processes relevant to poverty, vulnerability, crisis and risk including the International Conference on Financing for Development in Addis Ababa (July 2015), the adoption of the post-2015 development agenda in New York (September 2015), the United Nations Climate Change Conference in Paris (December 2015) and the World Humanitarian Summit in Istanbul (May 2016).

The case for investing in DRR

Last week in the build up to Sendai, the United Nations International Strategy for Disaster Risk Reduction (UNISDR) launched the 2015 Global Assessment Report on Disaster Risk Reduction (GAR 2015). The GAR 2015 provides a comprehensive review of current and projected trends in global risk. The report provides compelling evidence of the need to invest in reducing risk to minimise spending on dealing with disasters. Some of the key findings include:

1.  The poorest and most vulnerable people have the highest exposure to disasters

The case for investment in DRR is clear. Alongside the potential savings DRR investments can realise, there are recent examples where a significant allocation of resources has directly reduced the impact of large-scale natural hazard events. In the 2014 GHA Report, we highlighted how DRR investments from the Indian government and local authorities in the Adhra Pradesh and Odisha regions greatly reduced the number of fatalities caused by Cylone Phailin in 2013, compared with a similar intensity cyclone, Cyclone Orrisa in 1999.

Are investments in DRR materialising?

While investment in DRR has been emphasised since the adoption of the HFA in 2005 and increasingly in the build up to Sendai, concrete discussions around financing have so far been limited. Governments have the primary responsibility for spending on DRR, yet there are only a few examples of countries where DRR financing has been clearly identified in national budgets (see UNISDR 2013).This is not surprising as countries with fewer national resources are disproportionately impacted by disasters. These are countries where international spending on DRR is needed and of greater significance.

Current estimates suggest while there has been a slight increase in DRR spending within international development assistance, it remains a very small proportion of total expenditure, just 0.4% of the total amount spent on international aid between 1991 and 2010 (ODI 2013): 0.7% of Organisation for Economic Co-operation and Development (OECD) Development Assistance Committee (DAC) development assistance in 2011 (GHA 2013). In terms of dealing with disasters and humanitarian emergencies, a minimal proportion (5.4% in 2013) of international humanitarian assistance can be identified as having been spent on disaster prevention and preparedness since the HFA was launched.

It is likely that the actual figures are higher as humanitarian activities that contribute to reducing risk might be embedded in other programmes and so reported as such. It’s also widely acknowledged that the existing data on international aid are not yet adequate to enable systematic tracking of DRR investments within development assistance (including humanitarian) expenditure. Improvements in the data on DRR financing are needed to better understand where and how investments are being made. Better data will help to identify gaps in spending and the extent to which DRR is being adequately mainstreamed within all development sectors. 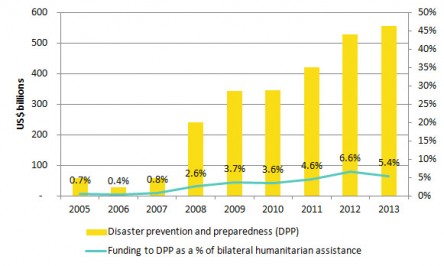 How can international DRR finances be better tracked?

A marker for disaster risk management is under consideration by the DAC Working Party on Development Finance Statistics at the OECD, as a way of improving visibility of spending on risk management (including DRR). It is hoped that the presence of the marker will encourage the mainstreaming of disaster risk management into development planning, as it will require the review of every aid activity through a “disaster risk management lens”. This is an important and welcome step forward in DRR data and provides the tool to improve the visibility of where DRR is mainstreamed within development programmes. However, it is not the panacea for tracking DRR financing. Firstly, DAC donors are only one set of donors within the international financing picture – so the marker won’t apply to those outside this group (other bilateral donors, regional bodies and private donors), although it could perhaps be a useful model for them. Secondly, visibility of mainstreaming masks big differences in the type and extent of investment in DRR in a given programme and is a long way from being able to quantify exactly how much is being spent on DRR. There have also been issues where limited reporting has undermined the value of some existing markers, such as the gender marker (Development Initiatives, 2014 and GHA 2015).

What about DRR funding at the national level?

Identifying DRR financing in national budgets is at least as challenging. Many countries operate traditional budget systems that focus on financial compliance and are typically not geared to enhancing policy clarity or effectiveness (International handbook of public financial management, 2013). As with international expenditure, the cross-ministry/sector nature of DRR means it is often embedded in other activities and cannot be easily identified.

There have been recommendations to include DRR budget codes within national budgets (see Darwanto 2012). Such codes indicate whether a budgeted activity has a DRR purpose or focus and would be used across all ministries and agencies. Useful lessons can be drawn from other cross-sector policy objectives included in national budgets. The Nepalese government through the Ministry of Finance and National Planning Commission have introduced a climate budget code to allow for tracking of climate expenditure. The initiative has led to an allocation of 10.3% of Nepal’s 2013/2014 national budget to climate funding.

Discussions on financing in Sendai

While Sendai is first and foremost a forum for agreeing a future framework for DDR rather than mobilising funding, the importance of investments from national, international and private sector resources are likely to feature throughout. International development financing is only one of these potential resource flows for DRR and needs to be considered in the context of all resources to complement national initiatives and budgeting.

More financing is undoubtedly needed, but needs to come hand in hand with better data to understand how much is actually given, from whom, to whom and for what. Sendai offers an opportunity for commitments to this at the national and international levels – based on the understanding that better data can drive better spending decisions, and ultimately the reduction of risk for those most vulnerable to disasters.

GHA (2012) Disaster Risk Reduction: Spending where it should count

Share Will discussions on DRR financing materialise in Sendai?