Last week, the UN launched the annual global appeal for humanitarian funding – the Global Humanitarian Overview. And once again, now for the fourth year ru

Last week, the UN launched the annual global appeal for humanitarian funding – the Global Humanitarian Overview. And once again, now for the fourth year running, requirements are at a record level. Already, the total call for 2016 funding is at US$20.1 billion. This is marginally more than the current 2015 total [1] of US$19.9 billion, but nearly four times the US$5.2 billion a decade ago at the end of 2006.

It is hard to predict (we didn’t get it right last year) what additional requirements we might see in 2016 as crises erupt or escalate, but we can anticipate that this initial figure for 2016 requirements will rise in what the appeal document calls a “grim year ahead”. Indeed, it notes that figures for many of the appeals are preliminary estimates and those for Sudan are yet to come. During 2015 requirements rose by nearly a fifth (approximately 21% or US$3.5 billion), largely driven by the addition of the Sahel appeals as well as the Nepal flash appeal and increased requirements for Yemen. And 2015 saw a relatively modest rise compared with the roughly 40% and 50% increases in the course of the previous two years respectively.

The group of 33 response plans (including 27 single country humanitarian response plans (HRPs) and six regional refugee response plans) included in the overview show very little change from the current 2015 appeals list. While the ‘flash appeals’ for the disasters in Nepal and Vanuatu have ended, the only new response plan is for Ethiopia – a US$1.4 billion plan to support the government to respond to the effects of El Nino. While a humanitarian requirements document (HRD) for Ethiopia was also launched in 2015, this is the first time it has been included in the global appeal, an indication of the severity of the current situation [2]. The 2016 requirement for Ethiopia is triple that of the mid-2015 HRD making it the fourth largest appeal for the year ahead.

The Syria crisis appeals continue to dominate the appeals requirements. Combined, the US$3.2 billion appeal for requirements inside Syria and the US$4.8 billion requirement for the refugees in neighbouring countries (Refugee Response and Resilience Plan – 3RP) make up 40% of global total requirements, a volume and proportion that has been steadily on the rise. Together the five largest appeals – for Syria, South Sudan, Yemen and Ethiopia, each over the billion dollar mark – make up just over 60% of global requirements.

Figure 2: UN-coordinated appeals for Syria response and regional refugee and resilience (Syria 3RP) response as a % of total appeal requirements 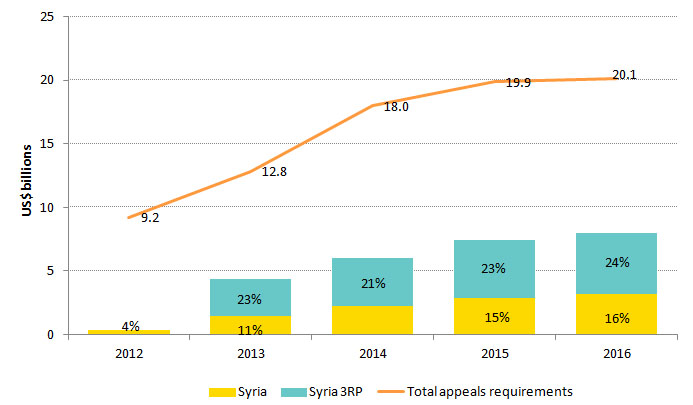 The largest appeals are also persistent appeals: 2016 is at least the fifth year running that Syria, South Sudan and Yemen have had appeals. And they are in the majority – more than half of the 2016 HRP countries [3] (18 of 27) have had response plans for at least five years, and nearly  a quarter (seven countries) for at least 10 years, making a strong case for multi-year planning, programming and financing. In the 2015 GHA report we noted that there were 13 multi-year appeals and as the individual response plans are released over the coming months, we’ll see if this will change in 2016.

What hope for meeting the 2016 requirements?

So how much funding can these growing appeals expect to mobilise? The track record of the appeals shows a persistent shortfall – while requirements have grown, the funding has not kept pace. With 2015 drawing to a close, the US$19.9 billion for this year is 49% funded [4] – the largest shortfall to date in both volume and proportion.

From acronym reshuffle to paradigm shift

The UN-coordinated appeals don’t represent all humanitarian needs everywhere, but their persistent and growing requirements and shortfall are prompting many of the big questions about humanitarian financing now gathering momentum around the World Humanitarian Summit (WHS) and the High-Level Panel on Humanitarian Financing. There is consensus that there is no single fix: new donors, better investments in prevention and resilience, harnessing additional non-humanitarian resources, more transparent and cost-effective transactions and responses are all part of the solution. And within this, there are calls for an appeal system that conceptualises and costs needs, and mobilises funds for these very differently in the future.

There have been numerous changes to the UN-coordinated appeals over the past few years – from consolidated appeal processes (CAPs) to strategic response plans (SRPs) to HRPs – these have been more than acronym reshuffles, bringing changes in the planning, costing and reporting systems and processes, and in the case of the Syria 3RP, an intended ‘paradigm shift’. However, as global requirements continue to grow, it is likely that the WHS or HLP will spur calls for a more fundamental rethink of how the appeals system and appealing agencies transparently and comparably arrive at a cost-effective bill for an effective response – a bill that diverse donors would be mobilised and confident to pay in full. Developments in the 2016 requirements and funding will be telling, but the 2017 Global Humanitarian Overview will be the one to watch.

[2] An appeal for Ethiopia was last included in the list of UN-coordinated appeals on OCHA’s FTS in 2006 https://fts.unocha.org/pageloader.aspx?page=emerg-emergencies&section=CE&Year=2006.

[3] Analysis covers the countries with HRPs rather than regional response plans.

[4] Figures correct at time of writing and derived from the Global Humanitarian Overview.