Tracking the Sustainable Development Goals at village level: Our learnings from localising the SDGs in Kenya

Is SDG tracking best done at village level? The Millennium Development Goals (MDGs), ratified by UN member states and a multitude of development actors, we

Data collected at community level has a vital role in monitoring progress against SDG targets. Such data speaks best about people and their immediate needs. When produced and used in collaboration with the targeted communities, it ensures resulting development work is relevant and sustainable.

The Millennium Development Goals (MDGs), ratified by UN member states and a multitude of development actors, were the world’s biggest promise to keep development and poverty eradication on the international agenda at a time when interest in global issues was waning. The MDGs provided a set of eight goals, each with specific targets and indicators to track the world’s progress on development issues. These were backed by a multitude of international commitments to address certain components of the MDGs and to direct financing and technical support towards specific areas identified by the goals. There were some key successes, such as a 66% increase in official development assistance in the period 2000–2014[1] and a reduction of the total number of people living in poverty. However, many countries failed to meet a number of the MDGs. The most common reason given for the poor performance of a country against the MDGs was that the targets were not well designed for their contexts, such as differences in countries’ initial levels of development, or what resources and capacity for change they possessed. Crucially, many targets lacked reliable, complete data for comparative baselines with which to track progress.

Some critics feel that the SDGs risk similar pitfalls. This is because we are still faced with some of the same big challenges, such as the lack of reliable data or a clear consensus on indicators and methodologies for measuring progress over time. There are also critics who are concerned that while the SDGs have a higher aspiration to leave no one behind, the process for achieving the SDGs has a high chance of maintaining a ‘top-down’ approach that the MDGs had.

As development actors, governments and the rest of the world make sense of the practical implications of the SDGs, there is an opportunity for communities and citizens to take the initiative and generate data that makes sense to them and helps address real-life, real-time problems. The data generated to inform national-level processes is highly consolidated and is often far removed from the lived experiences people gain in their local areas. This is why national data is barely used to inform the implementation of development programmes at the levels that would be most useful to citizens. Micro-level data – data that is specific and detailed – gives a better picture of the status of villages, households or individuals; it is at these most disaggregated levels that relevant, contextualised targets can be set. The same communities can then initiate practical action to achieve localised priorities. Although such data lends itself no less readily to the sorts of analyses that governments and development partners are used to, it will take a while before national systems are sufficiently organised to work consistently with micro-level data. But this is an opportunity we cannot afford to miss.

It seems logical that data collected at community level has a vital part to play in monitoring progress against SDG targets. Such data speaks best about people and their immediate needs. Subnational data could greatly enrich national statistical systems, help reflect realities and priorities at the grass roots, make action more relevant, and strengthen citizens’ ownership of, and participation in, generating and implementing solutions.

Our learnings from localising the SDGs in Kenya

Francis Kariuki, a local chief, and the residents of his community in Lanet Umoja (in Nakuru County in Kenya) have done work that proves the usefulness of community generated data in tracking progress against the SDGs. Under the Global Goals for Local Impact project, run by the Open Institute with technical and financial support from Development Initiatives, the Lanet Umoja community has been collecting data to inform their own development plans since September 2015. The community agreed to track key issues affecting their day-to-day lives: poverty; health; education; gender inequality; clean water and sanitation; security; electrification; and the use of Twitter (a communication tool for the Chief and the citizens). The Chief and the citizens are using mobile data collection and other techniques, and are having the data digitised.

The Lanet Umoja community’s areas of focus coincide with the following SDG goals:

The data, collected from more than 10,000 households (which is different from the official statistics data, which suggests that there are 7,500 households) will be made available via an online dashboard. Here are some examples of the preliminary findings: 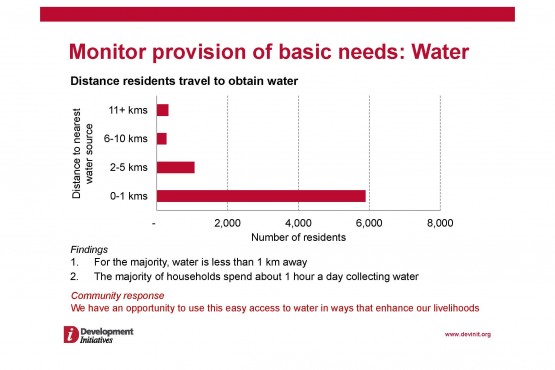 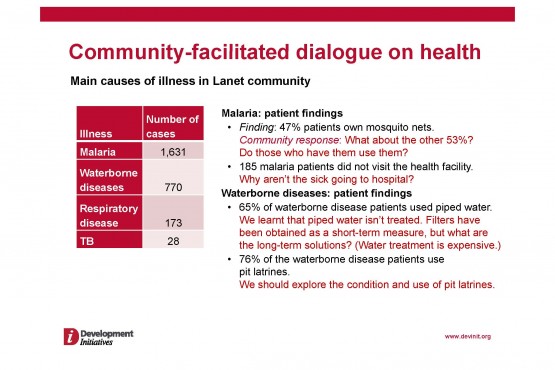 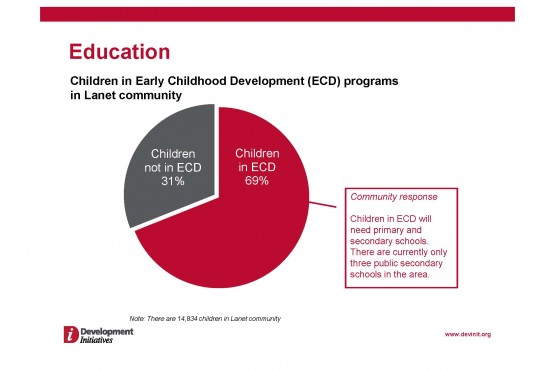 The key learning that has emerged from this community exercise is that it is possible for ordinary citizens with varying levels of literacy to collect useful data disaggregated down to the household level. Another finding is that to maintain interest and ownership – and keep the data up-to-date and relevant – the data collection process needs to be integrated within existing administrative systems that enjoy community support.

For Lanet Umoja, the administrative system that anchored the data collection was the Nyumba Kumi Initiative, a Kenyan initiative set up in 2004 to improve security by encouraging community coordination and action. The initiative has shown that by working together, citizens can maintain a safe and healthy environment – something of benefit to both individuals and their communities. It is based on a system that divides administrative regions into self-organised clusters of about 10–15 households. Clusters are headed by cluster leaders who report to the Chief – the primary security officer at Kenya’s most disaggregated administrative level. Under this initiative, the cluster leaders and the Chief also monitor social, environmental and health issues that may cause conflict or pose a danger to the community. The national government has given them a legal mandate to collect information useful to the communities’ development projects (so long as it remains within the Chief’s locus of control).

The Nyumba Kumi system made the data collection exercise successful – gaining almost 100% coverage – by promoting community ownership of both the data collected and the findings. Because the data was gathered by Lanet residents themselves, it focused on indicators that would make administrators and residents aware of existing problems, and so encourage them to plan how to better address these. For this reason, the initiative ensures the relevance and sustainability of any resulting development work. The data the citizens chose to collect is helping them target solutions at the household, school or health facility level, which will help to ensure equitable development.

There are further applications for the results. Lanet Umoja residents and their Chief will use the findings to advise on how the data collected is useful for administrative purposes. They will also be able to make recommendations to resource-allocating government officials as to where certain development work is most needed.

Share Tracking the Sustainable Development Goals at village level: Our learnings from localising the SDGs in Kenya