To meet the urgent needs of people affected by the Syria crisis, donors must promptly deliver against funding commitments

As the Syria conflict enters its sixth year, the overwhelming scale of displacement and needs both within Syria and in the wider region continues to rise.

As the Syria conflict enters its sixth year, the overwhelming scale of displacement and needs both within Syria and in the wider region continues to rise. A record of more than US$11 billion was pledged to meet immediate and longer term needs of people affected in the region at the Supporting Syria and the Region conference in London in February 2016. A total of US$5.9 billion was pledged for 2016, and a further US$5.5 billion for 2017 to 2020.

Almost six weeks on, there is a considerable shortfall between funding pledged at the conference and funding received and reported, with only 11% of the funds pledged for 2016 (US$680.3 million) recorded on the UN Office for the Coordination of Humanitarian Affairs (OCHA)’s Financial Tracking Service (FTS). Following the conference there has been very little additional funding committed, according to the FTS, with total funds committed after the conference being lower than those prior to the conference. 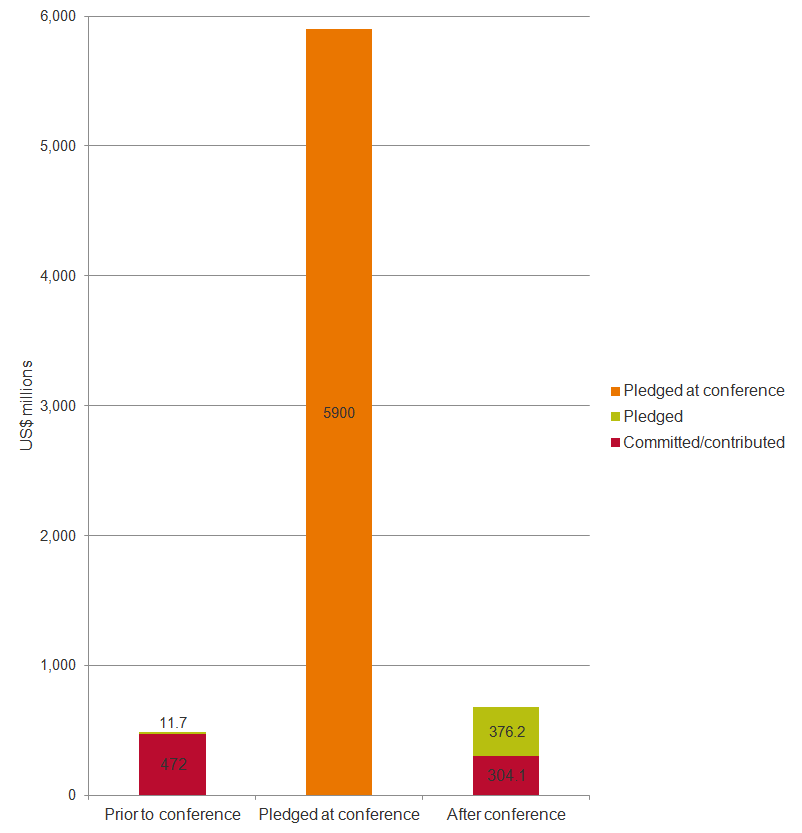 Notes: ‘Committed/contributed’ and ‘pledged’ refer to how funding is recorded on the FTS. ‘Pledged at conference’ refers to the pledges received at the Supporting Syria and the Region conference in London held on 4 February 2016.

To ensure that the urgent needs of people affected by the Syria crisis are met, donors must step-up in fulfilling their pledges made at the conference. Early delivery against pledges is crucial to enable agencies on the ground to plan in the longer term and effectively deliver services in response to current and growing needs, both within Syria and in the wider region. For a more detailed analysis of funding to the education sector since the conference, highlighting the importance of early action and timely fulfilment of pledges, see the new blog from the Malala Fund #NotLost: Time for action for Syria’s children, which features analysis from Development Initiatives.

The current shortfall between pledges made at the conference and subsequent commitments may be exaggerated by poor and slow reporting to the FTS. Better and timely reporting is crucial for monitoring donor accountability and the fulfilment of pledges. Real-time data on pledges, commitments and disbursements is essential for agencies to understand and respond to the changing picture of funding flows.

In recognition of this, the UN Secretary General’s recent report One Humanity: Shared responsibility highlights the need for increasing transparency of humanitarian financing, and it urges all actors within the humanitarian community to publish to the recently upgraded International Aid Transparency Initiative (IATI) Standard.

Share To meet the urgent needs of people affected by the Syria crisis, donors must promptly deliver against funding commitments