The ambition to address global gender inequality is at the heart of the 2030 Agenda for Sustainable Development and the commitment to leave no one behind.

The ambition to address global gender inequality is at the heart of the 2030 Agenda for Sustainable Development and the commitment to leave no one behind. Global Goal 5 seeks to “achieve gender equality and empower all women and girls”.

In order to track the extent that donors are delivering on global policy commitments on gender equality, reporting on gender-related spending is critical. Reporting on such spending through the OECD DAC’s gender equality policy marker has improved over recent years. The proportion of total official development assistance (ODA, commonly known as aid) coded with the marker has increased steadily from 52% in 2008, when the gender policy marker was established, to a high of 75% in 2014.

However, while reporting may be improving, the proportion of projects specifically targeted at gender has remained low, constituting a fifth of all aid. The combined proportion of ODA making a ‘significant’ or ‘principal’ contribution to gender equality in 2009 was 21%, falling slightly in 2010 to 18%, and has since only incrementally increased, standing at 23% in 2014. This is less than half of the 52% marked as not targeting gender equality (marked 0) in 2014. 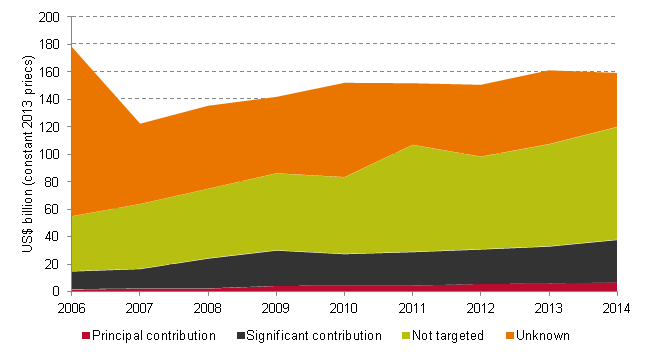 To ensure that Agenda 2030’s ambition to leave no-one behind is realised, Global Goal 5 on achieving gender equality and empowering all women and girls must be met. For this, it is critical that the following three points are achieved: