Mass flooding in Thailand is reported to be directly affecting over 2.5 million people and so far has resulted in over 350 fatalities (Department of Disast

Mass flooding in Thailand is reported to be directly affecting over 2.5 million people and so far has resulted in over 350 fatalities (Department of Disaster Prevention and Mitigation, Thailand). Total damages have now been estimated by economists to be in the region of US$9.7 billion (Human development forum foundation Thailand flood 2011 special).

Thailand is no stranger to the devastating impacts of natural disasters. In 2004 the Indian Ocean tsunami caused the country economic damages and losses in the region of US$2.5 billion (Global Facility for Disaster Reduction and Recovery (GFDRR)) and claimed the lives of over 5,000 people. While seismogenic tsunamis pose a demonstrable threat to Thailand, flooding is an annual occurrence and potentially the more significant hazard. Vulnerability to large-scale flooding is increasing as volumes of water from monsoon rains are becoming less predictable due to climate change, the impact of urbanisation and issues around land use practices (for more see causes of flooding in Thailand). In the decade preceding this year’s floods close to two million people have been affected every year by flooding (EM DAT CRED).

The unprecedented scale of this year’s flooding and the continued threat posed, particularly in the country’s capital Bangkok, has resulted in an international response to assist the Thai authorities and flood victims. 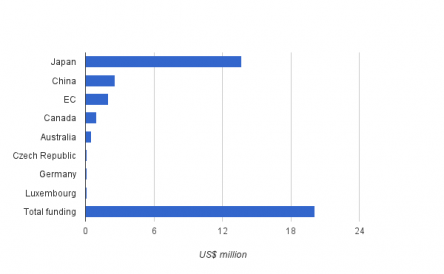 Since the situation in Thailand unfolded in October, international funding has reached just over US$20 million from various donors, Japan being the most significant of these, accounting for 68% of funding thus far. This is however a small fraction of the US$9.7 billion that is currently the estimated cost of  damages caused by the flooding.

While Thailand has not been one of the largest recipients of humanitarian aid (HA) in recent years, between 2005 and 2009 the country received on average US$40 million in HA. Over the same period the country received a total of US$2.4 billion for total official development assistance (ODA). Japan was the largest donor, accounting for 75% of all funding.

Of the US$2.4 billion in ODA only about 0.1% has been reported against activities relating to emergency preparedness and disaster risk reduction (DRR). The table below illustrates the small amounts directed to preparedness and DRR funding. 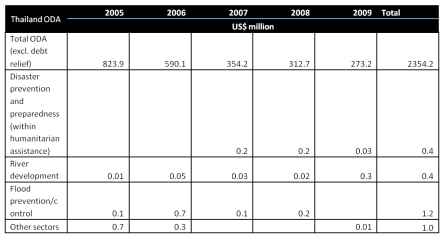 When events of this scale occur, international aid will inevitably be given to even the wealthiest countries, as demonstrated by the fact that Japan received US$720 million in humanitarian aid (UNOCHA FTS) following the catastrophic tsunami in March 2011. In such cases of unpreventable disaster, preparedness and DRR measures are essential. Any post-flooding recovery activities should aim to reduce the risk of future flooding and therefore minimise the levels of future investment required for response, both nationally and internationally. The international aid effort in response to the flooding crisis in Thailand is currently in the region of US$20 million, which is noticeably low when compared to the current estimates of damage costs. The knock-on effect of the flooding is being felt globally with many multilateral corporations announcing potential losses (for example, Toyota, Honda, Sony).

With events of this scale likely to occur again and again, the international community and private investors need to do more to support Thailand’s investments in DRR and to mitigate the potential impact of future events.