Is tackling global malnutrition still a top priority for the UK?

What the latest DFID spending figures tell us.

It’s an opportune moment to reflect on the UK’s commitments towards tackling global malnutrition. The UK’s Department for International Development (DFID) has been a longstanding champion of global nutrition and has provided leadership for Nutrition for Growth (N4G) since its inception in 2013. This month marks exactly six years since N4G was agreed. Led by the UK government alongside other partners, this historic Global Nutrition for Growth Compact was endorsed by 100 stakeholders including governments, businesses, CSOs and others. Now, crucially, we are just one year away from the 2020 N4G Summit in Tokyo – the deadline for stakeholders to deliver on their current N4G commitments. This will also be the moment when a new set of commitments will be made, making it a critical time for tracking progress.

As part of their efforts to monitor and evaluate their work, DFID commissions independent annual analysis of their nutrition spending, and the latest report has just been published. This detailed report tells us how much they are investing in nutrition and where it is going. It tells us whether DFID is meeting its commitments and living up to making nutrition a priority.

As you will see below, overall, there are clear positive trends in DFID’s spending on nutrition, not least in delivery against their N4G commitments. 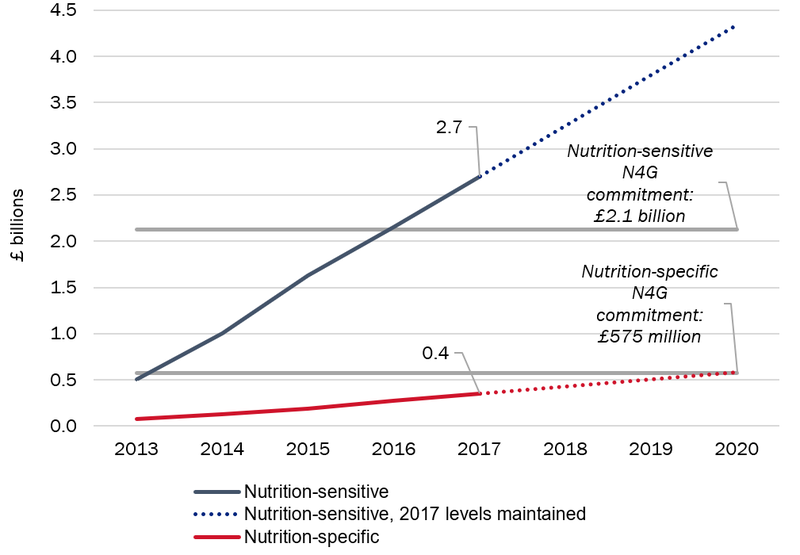 DFID also committed £280 million in matched funding until 2020 for financial commitments made by other actors towards nutrition-specific programmes. This has been used to successfully encourage further funding commitments by others, with a doubling of matched funding disbursed in 2017 compared to the year before, indicating that the maximum £280 million pledged will be met before 2020. 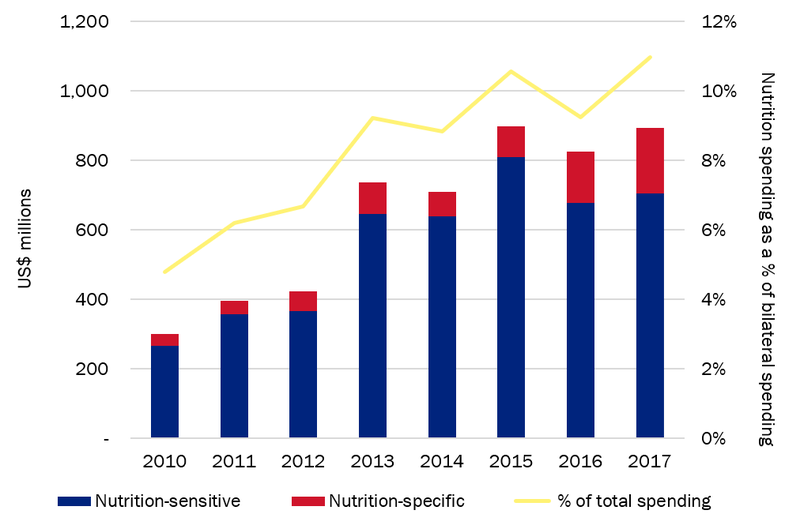 A further positive trend is that increased proportions being spent were promoting gender equality – one of the policy objectives – with over three-quarters of DFID’s commitments being marked as such.

DFID supported 30 countries, 5 fewer than last year – with the humanitarian sector being the largest area for spending on nutrition

In terms of how funds are allocated across sectors, it is unsurprising to see that the humanitarian sector is by far the largest area for DFID’s spending on nutrition. This largely accounts for which countries receive the largest volume of nutrition ODA overall – Yemen, South Sudan and Somalia are the top three. While five fewer countries received nutrition disbursements in 2017 than the year before, spending increased across 17 countries, largely due to humanitarian needs.

Interestingly, while emergency food aid accounted for the biggest single proportion of nutrition spending at US$149.2 million, this area saw a notable drop compared to the year before. At the same time, there has been a marked increase in disbursements to disaster prevention and preparedness activities, to a peak of US$37.3 million, attributable to greater disbursements to the Multi-Year Humanitarian Programme in Somalia. With growing emphasis on the need for multi-year funding in crisis contexts, it is positive to see increasing funds to nutrition are going to such programmes.

Recipients of ODA would benefit from knowing what is coming

One area where we see a negative trend is that the amounts of ODA that DFID committed (i.e. a formal obligation made to disburse funds) to nutrition has dropped. While there may be valid reasons for donors not wanting to commit spending too far in advance, recipients of ODA greatly benefit from knowing that it is coming, and DFID should strive to provide this where possible.

DFID is living up to its promise to make global nutrition a continued priority and, by delivering on that promise, is giving the UK a strong platform to champion nutrition globally and lead the way on action to tackling the huge challenges faced by every country in ensuring their populations are nourished.

This analysis was carried out as part of Development Initiatives’ work under the MQSUN+ consortium.

MQSUN+ is supported by UKaid through the Department of International Development; however, the views expressed do not necessarily reflect the UK Government’s official policies. MQSUN+ cannot be held responsible for errors or any consequences arising from the use of information contained in this blog.

Share Is tackling global malnutrition still a top priority for the UK?