Reporting on gender in emergencies is in decline – can the World Humanitarian Summit help to address this?

On March 11, a workshop will be convened under the auspices of the UN Commission on the Status of Women (CSW) that will bring together humanitarian policy-

On March 11, a workshop will be convened under the auspices of the UN Commission on the Status of Women (CSW) that will bring together humanitarian policy-makers with women civil society leaders to discuss and identify policy recommendations on gender for the World Humanitarian Summit (WHS). This initiative marks an important step towards strengthening the consideration of gender within the WHS. The issue of humanitarian financing is present in nearly all discussions around the WHS, and this workshop will be no exception. The Global Humanitarian Assistance (GHA) programme is actively working with the WHS humanitarian effectiveness thematic experts group to look at humanitarian financing across the discussions. For gender programming, as for all other areas of humanitarian response, for better and more accountable financing there needs to be strengthened reporting on what is being spent in this area. However, as illustrated in the below chart, donor reporting on funding to gender in emergencies, using the Inter-Agency Standing Committee (IASC) gender marker is currently poor, and declining. Chart 1: Humanitarian funding as per IASC gender marker, 2011–2014 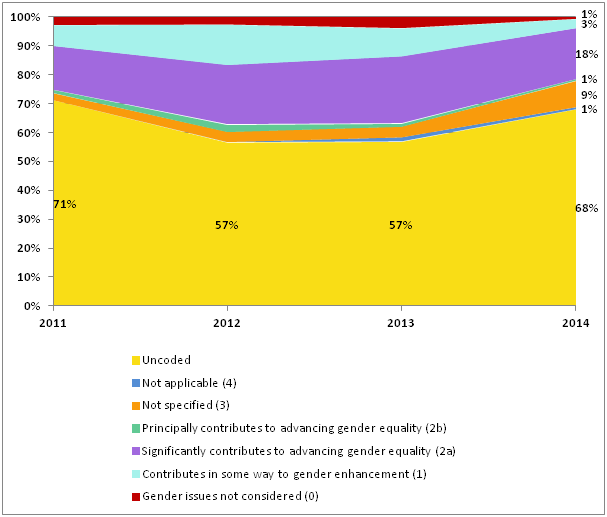 As illustrated, the proportion of projects that are ‘uncoded’ (i.e. not coded using the IASC gender marker) has increased significantly from 57% in 2012 to 68% in 2014. This means that less than a third of all projects reported to the FTS in 2014 were coded using a gender marker.

This increase in uncoded projects may in part account for the decline in the combined proportion of projects coded as making a ‘significant’ or ‘principal’ contribution to gender equality, which fell from 35% in 2012 to only 19% in 2014. This means that less than a fifth of all projects reported to the FTS in 2014 explicitly focussed on gender.

The closest we currently have to this is the IASC gender marker. There are some shortcomings with this marker as identified in a recent review – particularly regarding the need to extend the IASC gender marker from being a proposal development tool to being a programme cycle tool. However, reviewers said that it does provide a useful and standardised tool for tracking and comparing donor funding to gender in emergencies, which can be used as a starting point and improved over time.

A mandatory commitment from all donors to use this marker when reporting on humanitarian spending to the UN OCHA’s Financial Tracking Service (FTS) – for UN appeals and more widely – would help to fill this gap in information.

There will of course be some technical challenges regarding the use of the marker, but these can be overcome with sufficient planning and support. As some Humanitarian Country Teams move towards activity-based (rather than project) costing in their SRPs, they will need to work with UN OCHA to understand what this means for using the gender marker and ensure that granular reporting is not lost. To ensure consistency between donors in reporting, it is also important that internal systems used by donors to report spending on gender are compatible with standardised international reporting mechanisms on gender (i.e. the IASC gender marker), so that information contained in these internal systems can be easily transferred to international reporting systems (i.e. the FTS).

As an example, the European Commission’s Humanitarian Aid and Civil Protection (ECHO) department’s new ‘Age-Gender Marker’ (2013) seeks to achieve this and has been designed to be largely consistent with IASC gender marker by using a similar coding system. In addition, it is applied throughout the programme cycle, which is important in terms of tracking how funding to gender is actually allocated in practice (as opposed to how it was forecasted during the design phase). As such, ECHO’s marker offers promising potential in terms of generating key lessons for other donors regarding the application of a gender marker as a programming and reporting tool, and building consistency with international reporting systems on gender.

The WHS presents a critical opportunity to make a difference in humanitarian response to the different needs of women, men, girls and boys in crises, and to strengthen accountability on this issue. This must be accompanied by a stronger commitment from donors regarding their consistent use of an international standardised reporting system on gender.

Share Reporting on gender in emergencies is in decline – can the World Humanitarian Summit help to address this?