Source: OECD CRS Over the next 15 years, countries aim to deliver universal access to water and sanitation This is outlined in goal 6 of the sustain 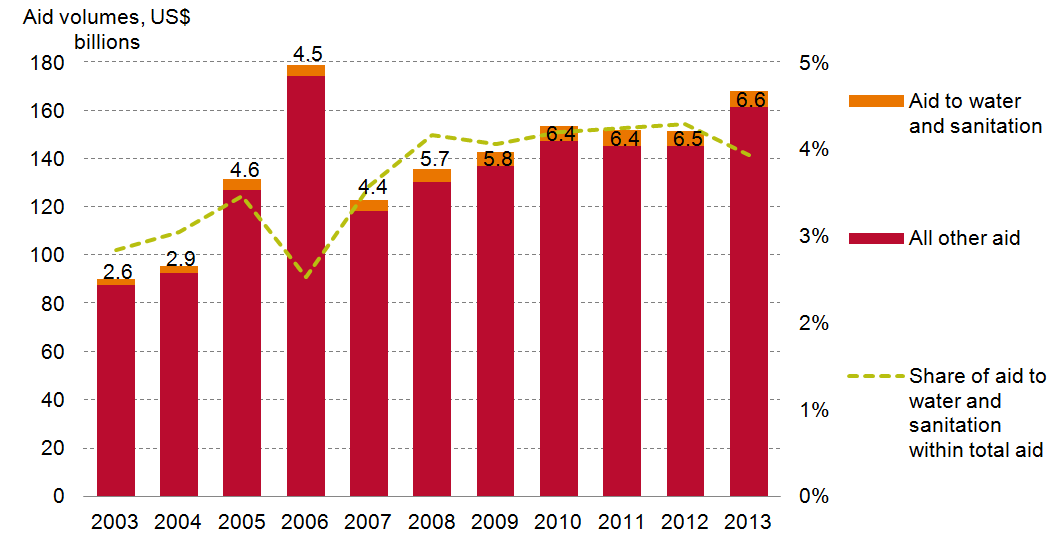 Over the next 15 years, countries aim to deliver universal access to water and sanitation

This is outlined in goal 6 of the sustainable development goals (SDGs): “Ensure availability and sustainable management of water and sanitation for all by 2030”. The SDGs are a new, universal set targets and indicators that UN member states are expected to use to frame their agendas and political policies over the next 15 years.[2] They replace the Millennium Development Goals (MDGs), which were agreed by governments in 2000 and expire at the end of 2015.

But more recent years show a reverse in this tendency

For more information see the WaterAid report 2015 Essential element: why international aid for water, sanitation and hygiene is still a critical source of finance for many countries, which is based on analysis by DI.

[1] The OECD DAC Creditor Reporting System (CRS) is the main source of data for this analysis. All figures on financial flows are in 2012 prices. Data refers to gross disbursements from all donors. Unlike net ODA, gross ODA disbursements do not take into account ODA loan repayments from recipient countries. Disbursements correspond to the release of funds or the purchase of goods or services for a recipient.

[3] WHO, UNICEF, JMP define an improved drinking-water source as one that, by nature of its construction or through active intervention, is protected from outside contamination, in particular from contamination with faecal matter. ‘Improved’ sources of drinking water include: Piped water into dwelling; piped water to yard/plot; public tap or standpipe; tube well or borehole; protected dug well; protected spring and rainwater.

[5] WaterAid (2015) report: Essential element: why international aid for water, sanitation and hygiene is still a critical source of finance for many countries.