Two world regions are home to almost four-fifths of the people in the global poorest 20%: South Asia (43%) and sub-Saharan Africa (35%). Three populous cou

Ending poverty everywhere by 2030 requires a shift of focus away from the country level towards the needs of the world’s poorest people, namely the poorest 20% of people globally (see factsheet for more details).

Around 441 million people, a third of those in the global poorest 20%, live in countries defined by the UN as being least developed countries (LDCs). But looking at depth of poverty – how far below the poverty line the incomes of poor people are – tells a very different story for LDCs.

Of people living in the poorest 20% globally, LDCs tend to have the deepest poverty levels 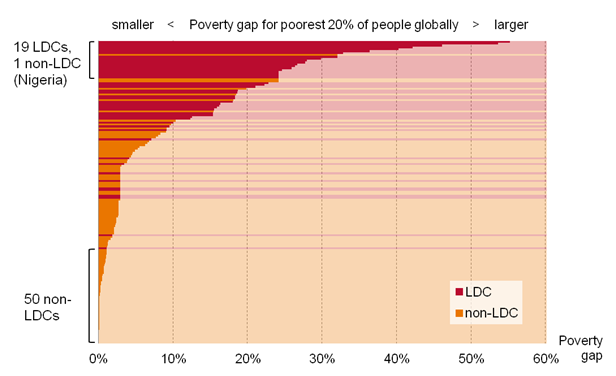 Looking at a selection of countries illustrates how variable poverty depths are across them. Poverty depths range from 55% in Madagascar to much lower levels of 9% in India and 2% in China, to just 0.1% in Turkey, although even in these countries poverty may still be concentrated in particular states.

For more information see our factsheet on the poorest 20% of people globally, and from April 2015 detailed data will be available from DI’s Development Data Hub.

* Income data comes from the World Bank’s PovCalNet models and is for income in 2011 (at 2005 purchasing power parity). All people in developed countries for which there is no poverty data (covering around 1 billion people) are assumed to have incomes above $1.48 a day.

** From World Bank PovCalNet, this represents the average gap for the whole population of each country, with everyone above the poorest 20% line (PPP$1.48) counted as having a zero gap.