Aid to basic nutrition* from DAC donors stood at US$760 million in 2013, representing a 77% increase from 2012 levels. Overall official development assista 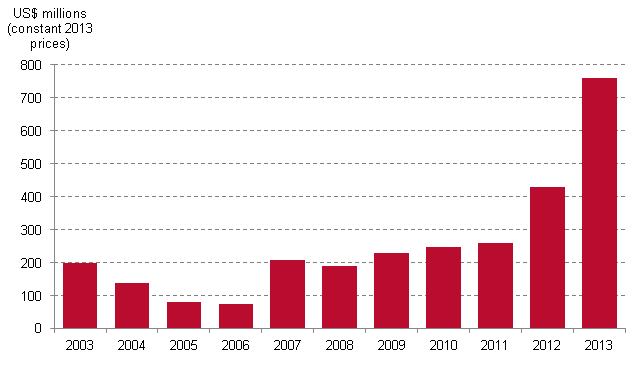 Aid to basic nutrition* from DAC donors stood at US$760 million in 2013, representing a 77% increase from 2012 levels. Overall official development assistance (ODA) to basic nutrition increased year on year between 2008 and 2013.

*Basic nutrition ODA is defined as ODA reported to the Organisation for Economic Co-operation and Development (OECD)’s Development Assistance Committee (DAC) under purpose code 12240 (basic nutrition). All figures are in US$, 2013 constant prices; figures are gross disbursements to all eligible recipients from DAC donors reporting to the OECD DAC Creditor Reporting System (CRS). Data for 2014 will be released in December 2015.