Only 4% of humanitarian funding from international donors has been given directly to non-governmental organisations (NGOs); UN agencies have been the main first-level recipients. 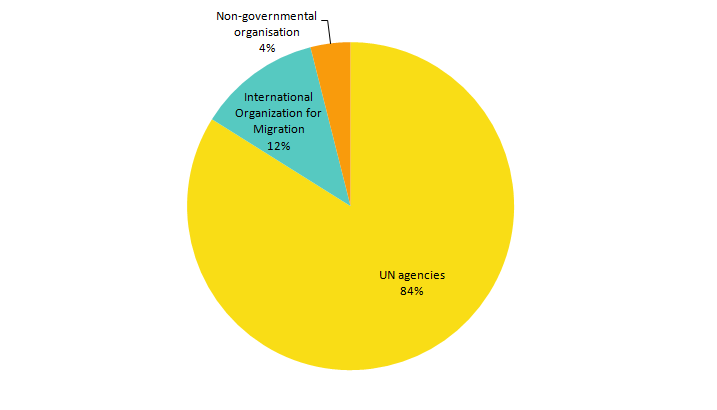 Only 4% of humanitarian funding from international donors has been given directly to non-governmental organisations (NGOs); UN agencies have been the main first-level recipients. The proportion of funding to NGOs as first-level recipients to the Iraq strategic response plan (SRP) is lower than the average in 2012, according to the GHA Report 2014.

The Iraq SRP (2014–2015), compiled by the UN and NGO humanitarian community, was revised upwards in October 2014 from US$312 million to US$2.2 billion. As of 19 January 2015, the SRP had received US$788 million, with UN agencies predominating as first-level recipients having received US$661 million, or 84% of funding. The International Organisation for Migration (IOM) also received 12% (US$96 million), a substantial proportion of the total amount for a single agency. The remaining US$31 million (4%) was split between 12 international NGOs.

This data only tells half the story: the UN agencies and the IOM are likely to be the first organisation receiving the funding, but they will then distribute the funding to international and local NGOs as implementing partners.

Our recent GHA crisis briefing contains more details on developments to the funding situation for the Iraq crisis.

The pie chart only show figures of funding received for the Iraq SRP 2014–2015 appeal and not total humanitarian assistance. Other humanitarian funding is also given outside of the appeal.

Only the first-level recipient organisation is reported to the UN Office for the Coordination of Humanitarian Affairs (UN OCHA) Financial Tracking System (FTS). Improving traceability (tracking development assistance) from the initial release of financing to the final recipients is one of the goals of the International Aid Transparency Initiative (IATI) standard.

The International Organisation for Migration (IOM) is an inter-governmental organisation that works closely with UN agencies and is part of the UN Country Teams.

Development Initiatives based on data from the UN OCHA FTS. Data downloaded 19 January 2015.