Last week, at the High-Level Meeting of the Organisation for Economic Co-operation and Development (OECD) Development Assistance Committee (DAC), governmen

Last week, at the High-Level Meeting of the Organisation for Economic Co-operation and Development (OECD) Development Assistance Committee (DAC), governments agreed to new rules that allow for a wider set of peace and security activities to be counted as official development assistance (ODA). The communiqué from the meeting maintains that all ODA must continue to have a development purpose. As such, the extension largely applies to a set of new non-coercive security-related activities with a longer term sustainable development objective. Examples include the following.

Activities included under the old rules have largely been maintained. Examples include the following.

The below chart provides an overview of aid spending on conflict prevention and resolution, peace and security to various sub-sectors during 2014 (as the year that data is most recently available). Funding to the conflict prevention and resolution, peace and security sector has increased by 67% since 2005, reaching a peak of US$3.9 billion in 2009. This peak in funding was largely in response to the crises in Iraq and Afghanistan and a rise in funding to security sector reform (SSR). Funding to SSR increased by US$787 million between 2007 and 2008. During the last decade, ‘peacebuilding activities’ as a sub-category has consistently received the majority of sector funding (52.5% in 2014).

Most ODA on conflict prevention and resolution, peace and security went to peacebuilding activities in 2014

Trends in aid to conflict prevention and resolution, peace and security sub-sectors, 2005–2014 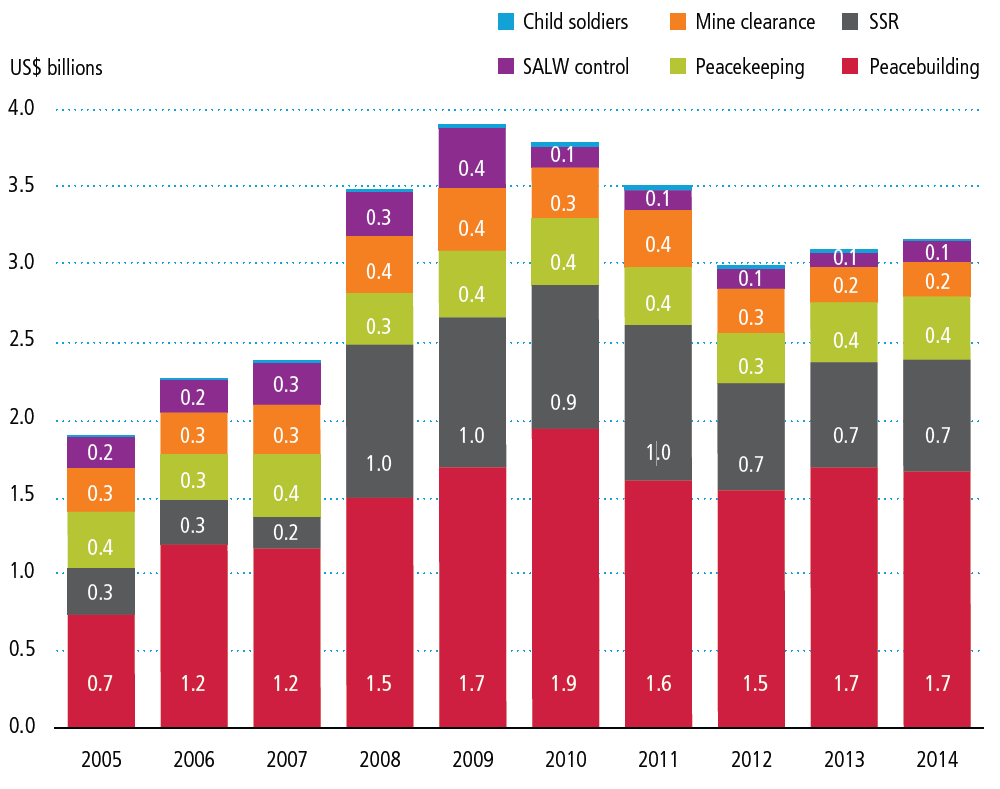 A diverse range of investments and activities can support the needs of the poorest and most vulnerable people, and more evidence is needed on the linkages between investments and outcomes to inform the allocation of resources. Peace and security is a prerequisite for sustainable development; thus, the inclusion of a wider set of non-coercive activities that seek to reduce the risk of violence, build the capacity of law enforcement agencies to provide public safety, and strengthen civilian oversight over partner military forces is an acceptable modification to aid rules if the beneficial impacts on development and poverty reduction can be demonstated. Such activities could, for example, play a role in meeting the critical security needs of vulnerable people in fragile and conflict-affected countries and in the delivery of global policy commitments that focus on the protection of vulnerable groups in such contexts.

The inclusion of new activities to train partner military forces in the ‘protection of women in conflict and prevention of sexual and gender-based violence’ will create incentives for governments to deliver on associated commitments set out in the UK-led Declaration of Commitment to End Sexual Violence in Conflict (2013), which has been endorsed by over 120 countries.

However, there is a risk that for some donors, depending on how the wording in the communiqué for the High-Level Meeting is interpreted, these changes to aid rules may result in resources being diverted away from activities with a greater development and poverty-reduction focus in favour of those that align to national security and political priorities. The new focus on ‘preventing violent extremism’ through ODA, which aligns closely with many donor governments’ foreign policy priorities on counter-terrorism, does validate this concern. As a result, the direct impact of ODA on people facing acute poverty and insecurity would be reduced, undermining efforts to meet the ambition set out in the 2030 Agenda on Sustainable Development to “leave no one behind”. However, this risk does not apply equally to all donors as there are likely to be differences in the way donors apply these rules to their ODA reporting.

To ensure that all ODA continues to be development focussed, it is critical that the following three points are achieved.

It is difficult to predict what exact impact these new aid rules will have on aid allocation and the targeting of resources to the most vulnerable people. We will know more when spending decisions are made over the coming months and years once these rules come into force. It is important that donor aid allocation and its impact on poverty reduction and development is monitored closely by parliaments, civil society and concerned governments, with any areas of concern being immediately raised and addressed by the OECD DAC.

[2] For more on commitments made at the Busan High Level Forum on Development Effectiveness, see the IATI Annual Report 2015 http://www.aidtransparency.net/annualreport2015/downloads/IATI_Annual_Report_2015.pdf