Could the new rules incentivise more loans to indebted countries? The Organisation for Economic Co-operation and Development (OECD) Development Assistance

This two-part blog series unpacks the outcome of decisions on how aid loans are counted and highlights some elements that need to be closely watched.

Could the new rules incentivise more loans to indebted countries?

The Organisation for Economic Co-operation and Development (OECD) Development Assistance Committee (DAC) recently convened its 2016 High Level Meeting (HLM; see Communiqué) in the wake of a series of important UN agreements relating to aid financing over the last year, the Addis Ababa Action Agenda and the 2030 Agenda for Sustainable Development. The HLM focused in the main on modernising official development assistance (ODA), addressing the question of what counts as ODA, what counts as other official flows (OOFs) and what may be tracked in the new proposed measure ‘total official support for sustainable development’.

Like the 2015 UN agreements, the 2016 DAC HLM outcomes reflect the perceived need of DAC donors to understand, manage and measure ODA in relation to a broader resource picture, and to co-finance development projects with non-DAC partners. Attention from commentators has mostly been focused on more controversial elements of the outcome, such as the move to incorporate some peace and security costs into ODA, and a first attempt from the DAC to set out measurements of effort around ‘private sector instruments’ (we will blog on this in due course).

Less attention has been paid to the HLM outcome regarding rule changes to ODA loans. This is partly because the rule changes were first floated in December 2014, and reporting directives are now just being finalised. However, it would be wrong to ignore this issue: loans have formed an increasingly large proportion of ODA in recent years, with gross loan disbursements reaching a new peak of US$42 billion in 2014 (of a total US$160 billion gross ODA). Our 2015 report on ODA loans found that half of all developing countries have seen loans grow faster than grants between 2005 and 2013, while some – including Egypt, Kenya, Myanmar and Turkey – saw an increase of over 500% in ODA loans during that time. Now the new rules are more or less in place, it may be time to take stock of the changes; particularly for stakeholders from developing countries, or for those interested in the influential handful of DAC donors – Japan, France and Germany – who provide over 90% of total bilateral DAC loans. (Among multilateral bodies, the EU and the International Development Association of the World Bank are the main sources of multilateral loans, providing two-thirds of gross loan disbursements.)

In this two-part blog series, we look at likely trends, impacts and implications of the new rules on loans in three key areas.

Changes in the calculations of loan concessionality

We’ve already blogged in detail on the previous method used to count ODA loans and the perceived problems with it. Essentially, drivers for the rule changes were a) to counter criticisms that reporting allowed donors to overstate the benefit of ODA loans (particularly less concessional loans) and b) to incentivise more and cheaper loans to the countries in most need, by providing extra ‘credit’ for donors who undertake these more ‘risky’ loans. The balancing act for the DAC was to avoid disincentivising ODA loan giving to middle income countries (MICs) and, as we argued in our previous report, they also needed to seek to avoid incentivising loans in country contexts where grants would be more appropriate.

The changes now agreed to how loans are valued in the ODA statistics are:

A risk to watch closely: the incentive to lend to poor countries rather than give

While the changes are a step in the right direction, the impacts need to be carefully monitored because, as noted in our 2015 report they could perversely incentivise more lending (rather than grant giving) to the poorest countries (as DAC donors will get more overall ‘credit’ for a loan to an LIC than for a loan to an MIC). New 2014 ODA data compounds this view: there are already two heavily indebted poor countries in the top 10 recipients of ODA loans: Tanzania and Ethiopia. In light of pressure on donors to reach aid targets, this needs to be watched closely: in case the decision to direct more loans to LICs is influenced by a need to increase headline figures of ODA, rather than the appropriateness of loans as an instrument. (It doesn’t appear that any action has been taken to change the rules on counting of debt relief, as we recommended previously.) 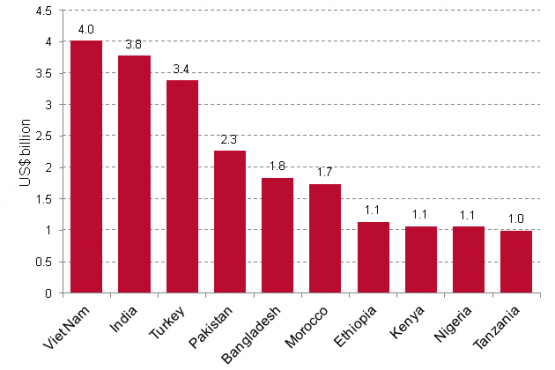 Read part 2 of this blog series.

[1] The grant element is the standard way of measuring how concessional a loan is. It can be viewed as the difference between the cost, in today’s prices, of the future repayments a borrower will have to make on the loan in question and the repayments the borrower would have had to make on a non-concessional loan. This is therefore the amount of money that is considered to have been ‘given away’ by the donor, hence grant element. It’s normally shown as a percentage of the value of the loan.