The Kingdom of Saudi Arabia (KSA) provided US$500 million against the Iraq Strategic Response Plan (SRP) in July 2014. When looking at cumulative funding t 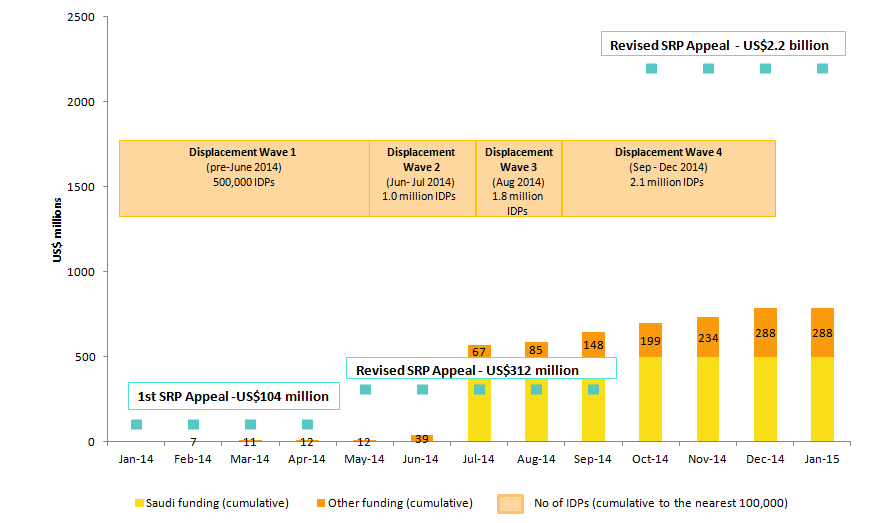 The Kingdom of Saudi Arabia (KSA) provided US$500 million against the Iraq Strategic Response Plan (SRP) in July 2014. When looking at cumulative funding to the crisis, monthly contributions from all other donors have been relatively low, especially in the context of the revised request of US$2.2 billion in October 2014.

The October 2014 revision of the Iraq SRP 2014–2015 requests US$2.2 billion to provide humanitarian assistance to an estimated five million people. This revision was the second of its kind since the SRP 2014 was launched in February that year with a total requested amount of US$104 million to provide urgent assistance to a target population of 240,000.

Funding for the Iraq SRP spiked to US$528 million in monthly funding in July 2014, mainly due to the KSA’s US$500 million contribution that month. New SRP contributions for all donors for the month of December totalled US$53.7 million in comparison. No new funding has been received against the appeal so far in 2015.

The estimated number of internally displaced persons (IDPs) in Iraq is currently 2.1 million according to the International Organisation for Migration (IOM) – an increase of 1.1 million since July 2014 when the KSA provided their US$500 million contribution. A significant increase in humanitarian needs over the last six months is evident.

Our recent GHA briefing has more detail on funding to the Iraq crisis.

Data is allocated to calendar years according to the ‘decision date’ of donors. The UN Office for the Coordination of Humanitarian Affairs (OCHA)’s Financial Tracking Service (FTS) shows a recent reallocation of all funding for the Iraq SRP 2014–2015 from 2014 to 2015.

Although no new funding has been received to the appeal, the FTS shows a sum of US$0.6 million from the government of Qatar to the Qatar Red Crescent Society. Additionally, the European Disaster Response Information System (EDRIS), managed by the European Commission Humanitarian Office (ECHO), shows an additional US$13.9 million worth of commitments from ECHO (US$13.4 million) and Germany (US$0.5 million) in January 2015.

Development Initiatives based on data from UN OCHA FTS. Data downloaded on 19 January 2015.

IDP numbers are taken from the IOM’s Iraq Displacement Tracking Matrix. Data as of 19 January 2015.