How we must approach poverty eradication in today's world

The world is far more interconnected and complex than ever before. As such, new ways of working are needed to meet the ambitions set by the Global Goals.

The world is quickly changing; it is far more interconnected and complex than ever before. As such, new ways of working are needed to meet the ambitions set by the Global Goals and various summits of 2015 and 2016. Policies and financing models of the past 50 years will not get us the success we want and need. We need to work differently, and we need to start now if we are to meet the goals the world has set for 2030. Here’s our data story.

As we all know, tremendous progress was made between 2000 and 2015 under the MDGs era in reducing global poverty. This, however, has been largely attributed to growth, and as such progress was patchy and concentrated in Asia and Latin America. According to poverty data from the World Bank, the current global poverty picture shows there are around 769 million people living in extreme poverty and more than half of them are in sub-Saharan Africa (Figure 1).

Figure 1: Just over half of people living in extreme poverty are in Sub-Saharan Africa 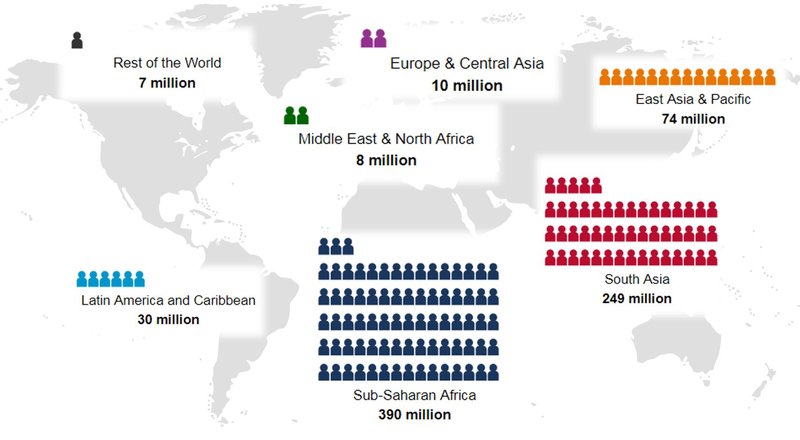 Source: Development Initiatives based on PovcalNet (2017)

If current patterns of growth continue, in 2030 we can expect to see around 489 million people globally living in extreme poverty, 85% (418 million) of which will be in sub-Saharan Africa. We will have failed to achieve SDG 1.

The message is clear: growth alone will not end extreme poverty, and unless action is taken people will be left behind.

Looking at the country level, projections show that poverty and vulnerability will increasingly be concentrated in some of the world’s most fragile places. These are often the most hard-to-reach countries and are at risk of being left behind from global progress. There are 30 identified high-risk countries, which have:

The majority of these countries are, again, in sub-Saharan Africa. Figures 2 to 4 illustrate a few of many ways that these groups of countries could be identified; the lists should be taken as suggestive, rather than definitive, of countries facing some major challenges.

Figure 2: Countries being left behind according to major poverty forecasts

Figure 3: Countries being left behind according to major human development indicators

Figure 4: Countries being left behind according to major climate and fragility indicators 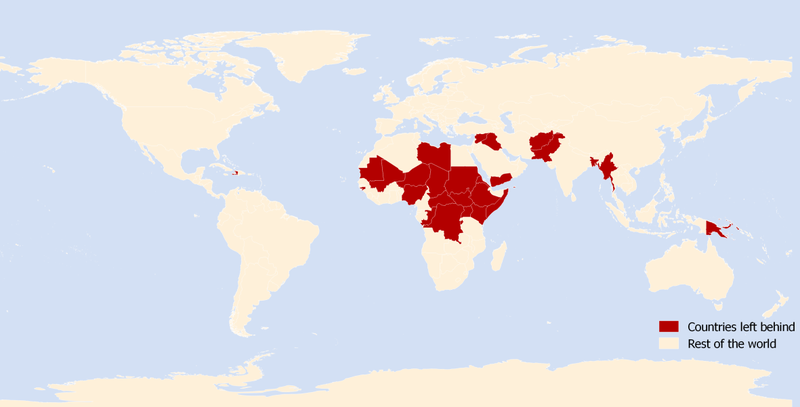 Countries most at risk of being left behind are – hardly surprisingly – those that struggle the most to mobilise resources for poverty eradication both domestically and internationally. Let’s look more closely at the financing picture.

To address the SDG funding gap we see the financing landscape is becoming ever more complex, and there are a wide range of resources available to developing countries (Figure 5). However, all these different flows have distinct roles and comparative advantages, and some are more effective in supporting poverty reduction efforts than others.

Figure 5: ODA is small compared with other global flows but plays a vital role in tackling poverty 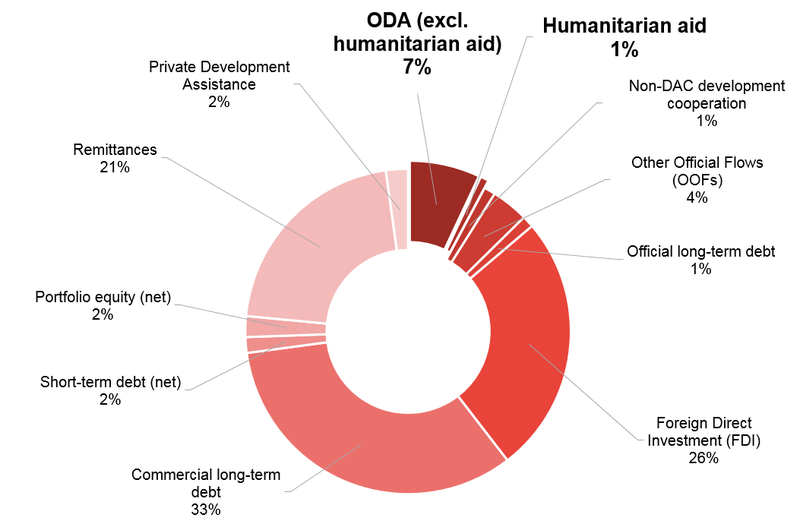 Notes: All data is for 2015, except Private Development Assistance, which is estimated based on data for 2008 to 2014.

Figure 6: Countries being left behind have limited domestic resources, and some international resources target better off countries 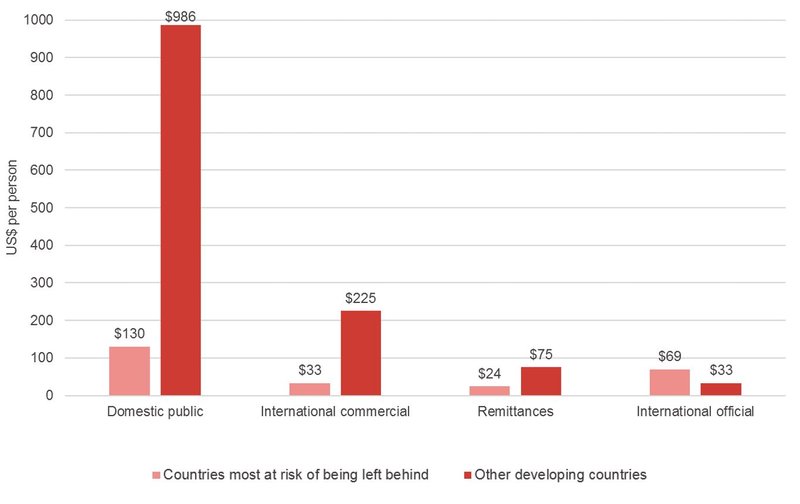 ODA has an important and unique role for countries at risk of being left behind – it is one of the few resources with the ability to target the poorest countries and focus on those people most at risk of being left behind. However, the international financing landscape is evolving (including a broader range of actors and changing reporting rules), which could pose risks to the ability of ODA to fulfil its potential.

There is, for example, an increasing trend towards blended finance, and our initial finding suggests that this could exacerbate the problem by favouring middle-income countries over those countries being left behind.

To ensure we have an approach to financing that will meet the needs of a rapidly changing global financing landscape we must as a minimum:

Findings in this blog are based on an initial analysis of the data. Final numbers will be presented in our forthcoming publication on financing countries being left behind.

Share How we must approach poverty eradication in today's world