Global ODA to agriculture increased in 2013

This total can be broken down into three categories: general projects and administration, harvest (crop related) and livestock.* Funding to all three categ

Official development assistance (ODA) to agriculture projects globally increased 7% between 2012 and 2013, from US$6.1 billion to US$6.5 billion. However, this was still below the US$7 billion peak in 2010. 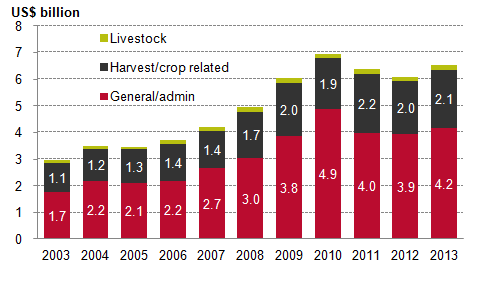 This total can be broken down into three categories: general projects and administration, harvest (crop related) and livestock.*

Funding to all three categories increased between 2012 and 2013, such that their proportions of ODA were broadly similar. The general projects and administration category was the largest every year, and stood at US$4.2 billion in 2013 (64% of the total).

‘Agriculture’ refers to the Organisation for Economic Co-operation and Development’s (OECD) Development Assistance Committee (DAC) purpose codes under the agriculture sector (purpose codes under 311) plus agro-industries (purpose code 32161). All figures are in US$, 2012 constant prices; figures are gross disbursements to all eligible recipients from DAC donors, non-DAC donors (Kuwait and the UAE) and multilaterals that report to the OECD DAC Creditor Reporting System (CRS). Data for 2014 will be released in December 2015.