In late September, the UN General Assembly ratified the Sustainable Development Goals. These are a new set of global goals established to replace the Mille

In late September, the UN General Assembly ratified the Sustainable Development Goals. These are a new set of global goals established to replace the Millennium Development Goals, which were brought in by world leaders 15 years ago to drive an agenda of poverty reduction across the world. The Millennium Development Goals were a success, helping to halve extreme poverty globally. The new goals are pledging to end extreme poverty by 2030, and this challenge is going to be much tougher than halving it was, and here is why.

1. Extreme poverty is increasingly concentrated in complex and difficult contexts

The number of people in extreme poverty who live in complex situations is on the rise. While 20% of extremely poor people lived in fragile states in the 1990s, today that figure is now 62%. Couple this with environmental vulnerability, and a huge 96% of those living on less than $1.25 a day are in fragile or vulnerable states.

This means the causes of extreme poverty are harder to tackle and the need to safeguard progress is greater. It is a further challenge for sustainability since climate change and conflict are both factors that can push people rapidly into poverty and keep them there for a long time – for example, the largest recipients of global humanitarian assistance are countries in protracted or recurrent crisis.

The Millennium Development Goals saw poverty halved – a huge achievement. We must however be conscious of the fact that in 30 countries extreme poverty actually went up during this time. The most rapid increase in extreme poverty can be seen in 18 sub-Saharan African countries.

To end poverty by 2030, sub-Saharan Africa would need to reduce poverty at a pace faster than South Asia has achieved over the last 15 years.

Between 2005 and 2012 India saw poverty reduce by 10% a year in some states, but in 8 smaller states available data shows that poverty increased. With the new Sustainable Development Goals promising to leave no one behind, we must see a shift beyond national averages to sub-national approaches to poverty reduction. 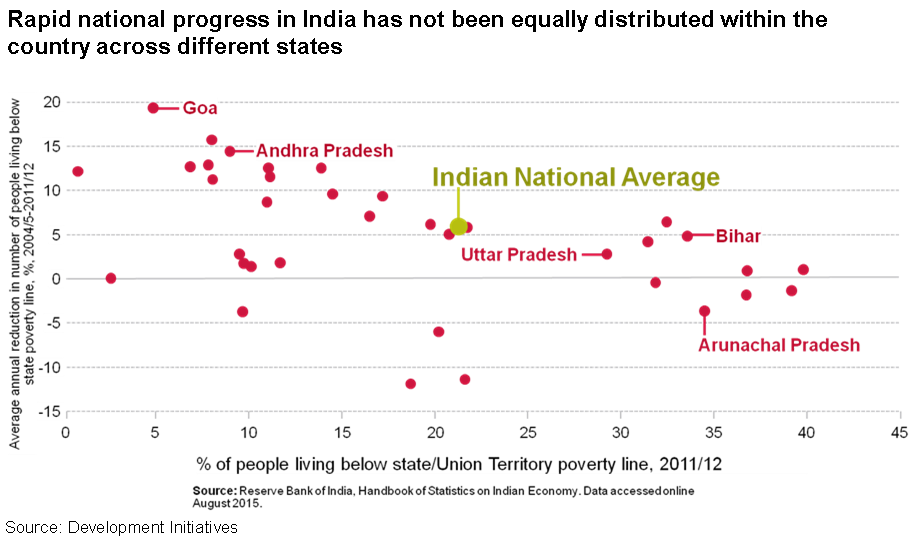 This requires a change in how decisions are made about targeting resources and much more detailed and transparent data on people in poverty and how they are progressing.

4. We also need to change behaviour in how aid is allocated to make it much more about the poorest people

It is widely acknowledged that aid (or ‘official development assistance’ or ‘ODA’ as it is more technically known) will play an important role in achieving global goals to end poverty; but, despite its unique poverty-tackling power as an international resource, it is often not spent directly on the poorest people. The mandate for ODA is ‘promotion of economic development and welfare’, which leaves a lot of room for it to be spent far wider than direct poverty reduction, and indeed this is the case. 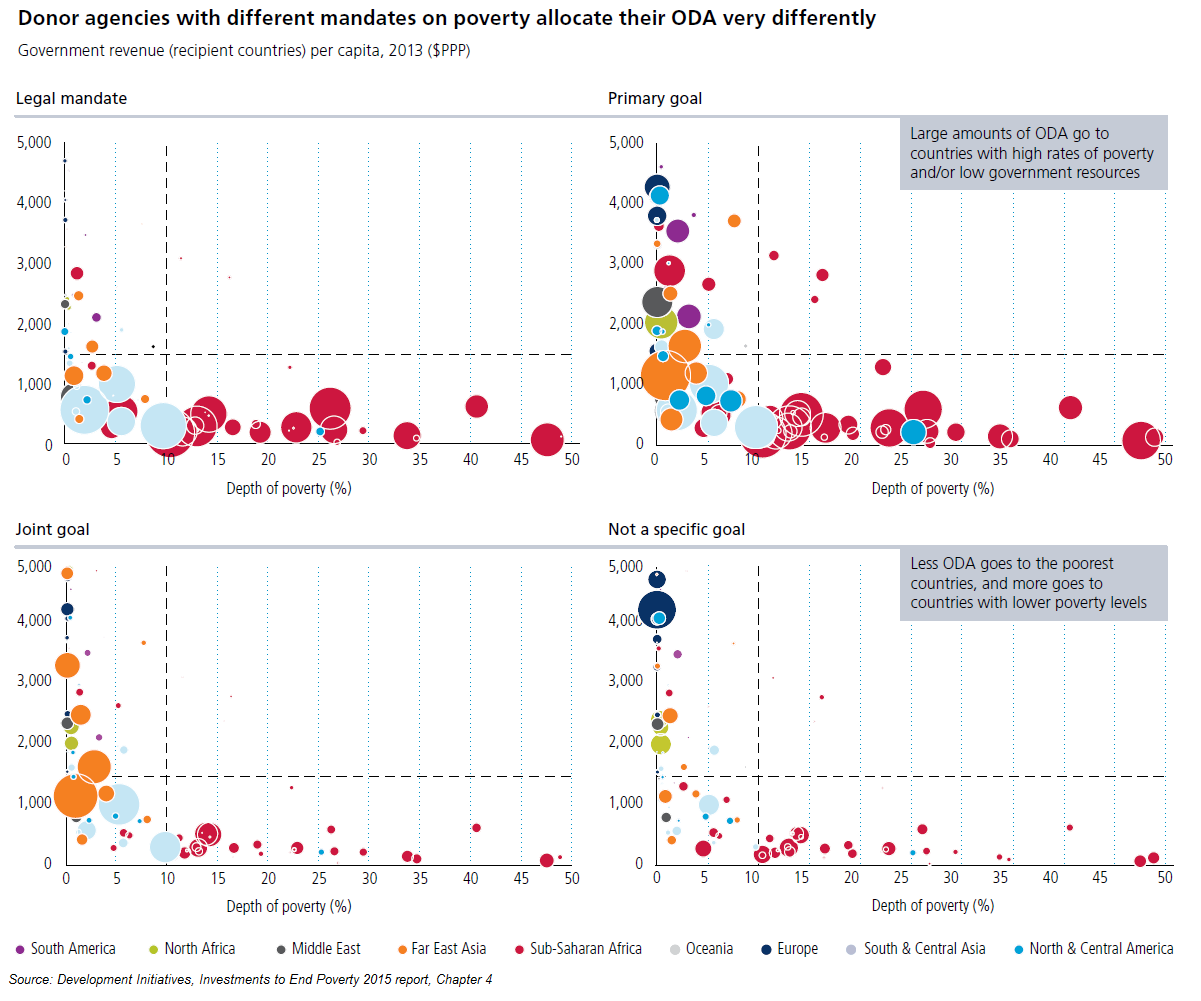 The wide variety of forms that aid can take allows it to be flexible and adaptable, unlike commercial resources that are bound by the need to seek profit and flow mostly to more economically developed countries. And while institutions in developing countries must take a lead in post-2015 implementation, the poorest countries simply don’t have the money to achieve poverty eradication by 2030. Making aid a lot more focussed on poverty reduction will be an important factor in ending poverty.

5. And finally, we need much better data to be able to measure our progress and get poverty to zero

There is need for a data revolution to sustainably improve data systems for collecting vital statistics so we can count people and make people count. Systems to produce even basic information on how many people there are do not function in many African countries. Just 12 out of 55 African countries have comprehensive birth registration and a quarter of African countries have not done a survey since 2008 or earlier. 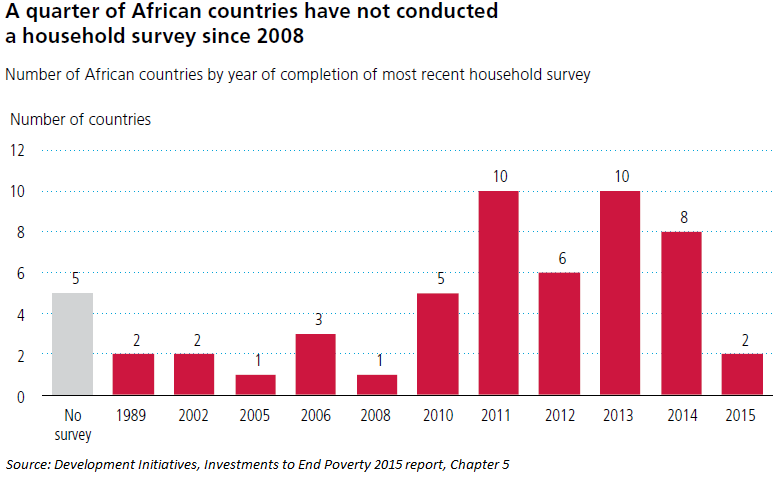 Civil registration of births, for example, is vital for undertakings such as estimating population size and understanding demographic trends; it is also key for policy making and planning in areas such as provision of public services. Without accurate information on how many people there are we cannot know whether we are effectively targeting the poorest people and making sure no one is left behind.

A much bigger challenge, but one we can meet

We have a big challenge on our hands – much bigger than delivering the Millennium Development Goals. But being fully aware of the scale of the task is the only way we can succeed. We must be bold and ambitious in our efforts to end poverty and not give up until we leave no one behind.