The 2013 Chronic Poverty Report makes sobering reading, and demonstrates that growth alone will not be enough to tackle poverty in Uganda.

The 2013 Chronic Poverty Report from Uganda (authored by our partners DRT Uganda, and the Chronic Poverty Research Centre) makes sobering reading. Entitled “Is anybody listening?” the report emphasises the continuing multi-dimensionality of Ugandan poverty. The title refers to what the authors see as as a fundamental disconnect between the Ugandan chronically poor, and Ugandan policymakers; caused by a failure on the part of Ugandan leadership to include poor people in policymaking, as well as a failure to communicate effectively.

A headline finding of the CPR is that economic growth will likely not be enough to eradicate the chronic poverty which persists in Uganda. The report also finds that targeted social protection policies (as well as policies that ensure inclusion into public services for poorer and marginalised groups), need reviewing and consolidating: to “get rid of those that are not working, and focus effort on those that are or can.” It contains analysis both of the data on those living in chronic poverty, and the social welfare policy environment in Uganda; research carried out largely by local organisations (including support from some of our colleagues in the Africa hub).

How many poor people in Uganda?

The second chapter of the Uganda CPR was an especially interesting read for us at DI. (We recently reported on the distribution and depth of poverty, relative to governments’ capacity to respond to this challenge, and projected future global poverty trends until 2030, in Chapter 1 of our Investments to End Poverty report.)  The CPR authors analyse data on Ugandan poverty, mainly from national household surveys (taken in 2005/6 and updated with a smaller sample in 2010).  The following findings stood out for me:

A strong message in the CPR is that the potentially positive benefits of predicted economic growth in Uganda are in danger of being offset by the country’s increasing economic and social inequality. This is caused by (in part) rural-urban migration and its impacts; as well as loss of livelihoods in the agricultural sector from environmental stress and climate change. 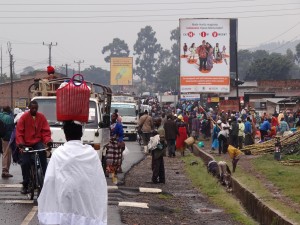 More efforts are needed to make growth work better for the poor. Social protection policies can play a vital role in mitigating any impacts of economic growth on the poorest, where they are failing to benefit from it. The report takes a detailed look at the emergence of social protection policy programmes in Uganda, and notes that Uganda is still experiencing basic challenges to implementing or targeting successful SP policies; they cite ‘lack of political will” and a number of other contributing social, political and structural factors.

The foreword by the Minister of State for Gender Labour and Social Development, whose ministry leads on social protection interventions, states that more coherent policies across the Ugandan government are needed in Uganda; to sustain the impact of the welfare interventions through a more “equitable distribution of resources” in Ugandan society.

For us at DI, the messages of the Uganda CPR will resonate as we follow post-2015 debates on what will replace the MDGs- and how we finance the end of poverty by 2030. The report reminds us just how urgent it is to get agreement on the priorities here. Even more importantly, it provides clear evidence that building consensus across all stakeholder groups- private sector, donors, governments, CSOs and multilateral agencies- is essential if we are to eradicate poverty by 2030. Growth-focused development strategies which are aimed at eradicating poverty, but which make no provision for those in chronic poverty (the elderly; the disabled; those in isolated rural areas with lack of access to opportunity, education and jobs; those vulnerable to climate change and disaster) could be counter-productive and remove the positive impacts of growth in the long term. This would risk putting our shared objectives, of “leaving no-one behind”, out of reach.

Detailed analysis of chronic poverty in the East African region will be found in the upcoming East African Chronic Poverty report, a collaborative effort with the CPRC and other organisations.