Lead Analyst Ian Townsend examines the data on ending poverty by 2030. This blog relates to Chapter 1 of our Investments to End Poverty report.

Ian authored the opening chapter of Investments to End Poverty, focused on prospects for ending poverty by 2030. This is the first in a series of blog posts from our analysts which explore the motivations behind the research areas covered in Investments to End Poverty, and take interested data enthusiasts through the methodology and background. Read the full report (and complete methodology).

My starting point for the opening chapter of Investments to End Poverty was one question: Can economic growth alone get the world to zero extreme poverty by 2030?*

With good global economic headwinds, growth can be a rising tide that lifts all boats… eventually. Assuming reasonable growth rates continue – and no new global crises – poverty against a fixed threshold is quite likely to fall, and ultimately to zero. But to galvanise effort getting to zero demands a deadline. Development Initiatives has believed for some time that it is possible to end extreme poverty by 2030. Only recently has this become widely accepted: the UN’s High-Level Panel report, being debated by world leaders this month, has proposed this as a global target. 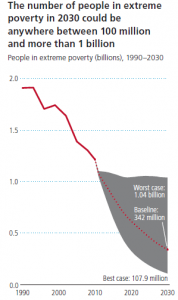 Brookings Institution research – The Final Countdown, well worth a read – shows that current economic growth patterns are clearly not enough to get us to zero by 2030. Even the best-case scenario – rapid growth, shared more equally with the poor – could see over 100 million people globally remaining in extreme poverty in 2030, almost all of them in sub-Saharan Africa. Should conditions worsen – slower growth, less equally shared – then over a billion people could be left behind. (You can explore this further in our data visualisation tool).

The finding that even optimistic growth patterns is not enough is critical. It means that further interventions are going to be needed in order for the world to get to zero by 2030. It suggests that, far from ‘trade not aid’, we will need both aid and trade… and also investment, remittances** and a range of other resource flows (as presented in our report).

Depth of poverty in Africa

Another key finding is the sheer divergence in the ‘depth of poverty’ in sub-Saharan Africa: average incomes of people in extreme poverty range from as low as $0.53 a day in DRC up to $1.10 a day in Cameroon.***

Data behind the scenarios

Working with Brookings we were able to base the Investments to End scenarios on an update of the data in their published report, including 40 recent country household surveys. Unfortunately, because of data quality issues we could only focus on seven countries in our report, although four were in sub-Saharan Africa.**** The Brookings research was based on World Bank PovCalNet – a fantastic resource for the surveys used to calculate poverty levels – and Economist Intelligence Unit growth forecasts.

This research cannot be a one-off. Economic conditions will change, and progress must be monitored and efforts re-focused accordingly to get to zero by 2030. Post-2015 we need a ‘World Poverty Outlook’: an annual or biannual globally and regional assessment, identifying risks to economic conditions which could undermine wider interventions to end poverty – and propose mitigations of those risks.

With major improvements to poverty data that our report calls for, these assessments should look at prospects for individual countries. In future they should delve within countries – down to the district and village level. These are vital data for targeting pockets of extreme poverty that persist in all – even the fastest-growing – developing countries.

* The extreme poverty threshold is set at $1.25 a day in 2005 prices, and is based on exchange rates adjusted for differences in purchasing power in different countries. Often an amount of money can buy more in a developing country because costs and prices are lower. It can be thought of as the equivalent of how much $1.25 could buy in the US in 2005, rather than how much you could buy if you changed US dollars into local currencies and bought things with that money.

** Remittances are monies sent back by migrants abroad to their families at home.

*** These spending figures are adjusted for relative purchasing power, like the $1.25 poverty line.

Projections and average incomes of the extreme poor data use the methodology outlined in Chandy, Ledlie and Penciakova, The Final Countdown: Prospects for Ending Extreme Poverty by 2030 (2013), applied to their dataset updated with 40 more recent country surveys.

If you have thoughts or questions on the  methodology and research on ending poverty in Chapter 1, please do leave your comments below or catch up with the DI team on Twitter @devinitorg.