In July of last year there was universal agreement under the Addis Ababa Action Agenda on the need for national institutions to be at the heart of, and hav

In July of last year there was universal agreement under the Addis Ababa Action Agenda on the need for national institutions to be at the heart of, and have ownership over, their own development agendas to drive sustainable poverty alleviation efforts. In addition to this, it was agreed that a full mix of financing including aid, international and domestic commercial resources, and public domestic resources is required to achieve it.

Of course, the mix of resources needed to promote growth and end poverty will be different in different country contexts. But for national institutions to have effective ownership of development policy, domestic public resources must provide a solid financing core that resources such as official development assistance (ODA) and commercial finance are built around.

This presents a problem for the poorest countries where, in the majority of cases, that core is not currently as large or as well used as it could be. A central challenge is therefore how countries can make more effective use of domestic public resources in sustainable and progressive ways to provide an adequate financing core for achieving nationally led pro-poor development outcomes.

As explained in our Investments to End Poverty 2015 report, governments in many developing countries raise too little revenue to implement the Sustainable Development Goals (SDGs) at the national level. As shown below, the countries with the greatest challenge in ending poverty have the lowest resources. Many sub-Saharan African countries in particular have a high depth of poverty and low government resources. Revenue in countries in this region is less than PPP$500 (adjusted for purchasing power parity) per person per year, with many even less than PPP$250 per person per year. To give an idea of just how low this is, other developing countries such as Namibia, Gabon and Bolivia raises over PPP$2000 per person per year. And developed countries such as the US and UK raise over PPP$15,000. For an in-depth look at the numbers, our Development Data Hub gives the global picture on domestic resource expenditure. 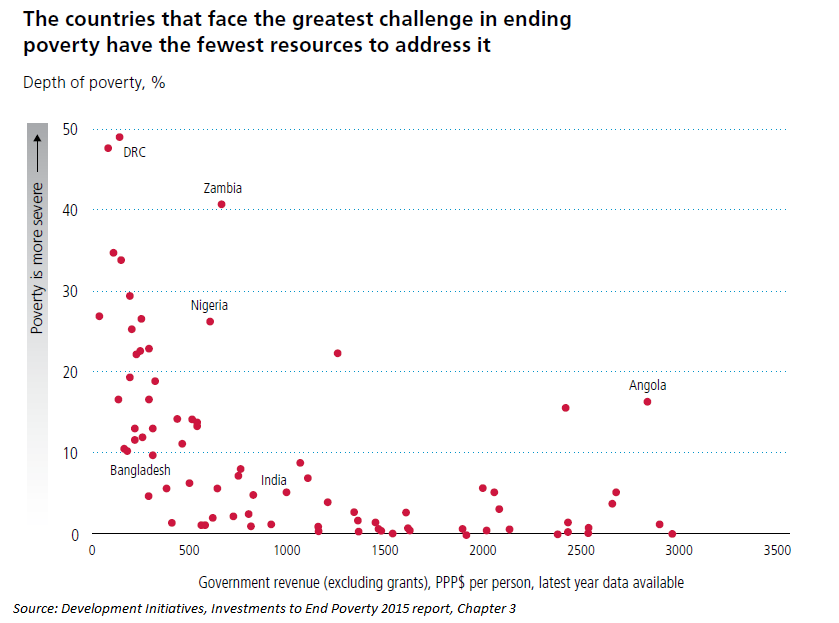 In addition, based on current projections (see graph below), countries where poverty is deepest have the lowest predicted growth. Without a significant shift in domestic resource mobilisation, it is likely that real-term domestic revenues will remain stagnant in the poorest countries.

During the last 15 years commitments have been established to ensure a minimum domestic spend on key sectors such as agriculture, water and sanitation, and education. This has led to increases as a percentage of spending to certain sectors, for example health spending in sub-Saharan Africa saw an increase from 7.4% in 2000 to 8.3% in 2013 and education from 14.1% to 17.3% in a similar period. However, while we may see an increase in the proportion of spend in key sectors, absolute spend is still very low and the poorest countries continue to struggle to allocate sufficient resources to key sectors.

While we see governments in the poorest countries becoming less reliant on concessional finance for their own financing bundle, dependence remains very high in key sectors linked to poverty reduction. Rwanda and Burundi, among others, show a dominance of donor resources in health and agricultural sectors. 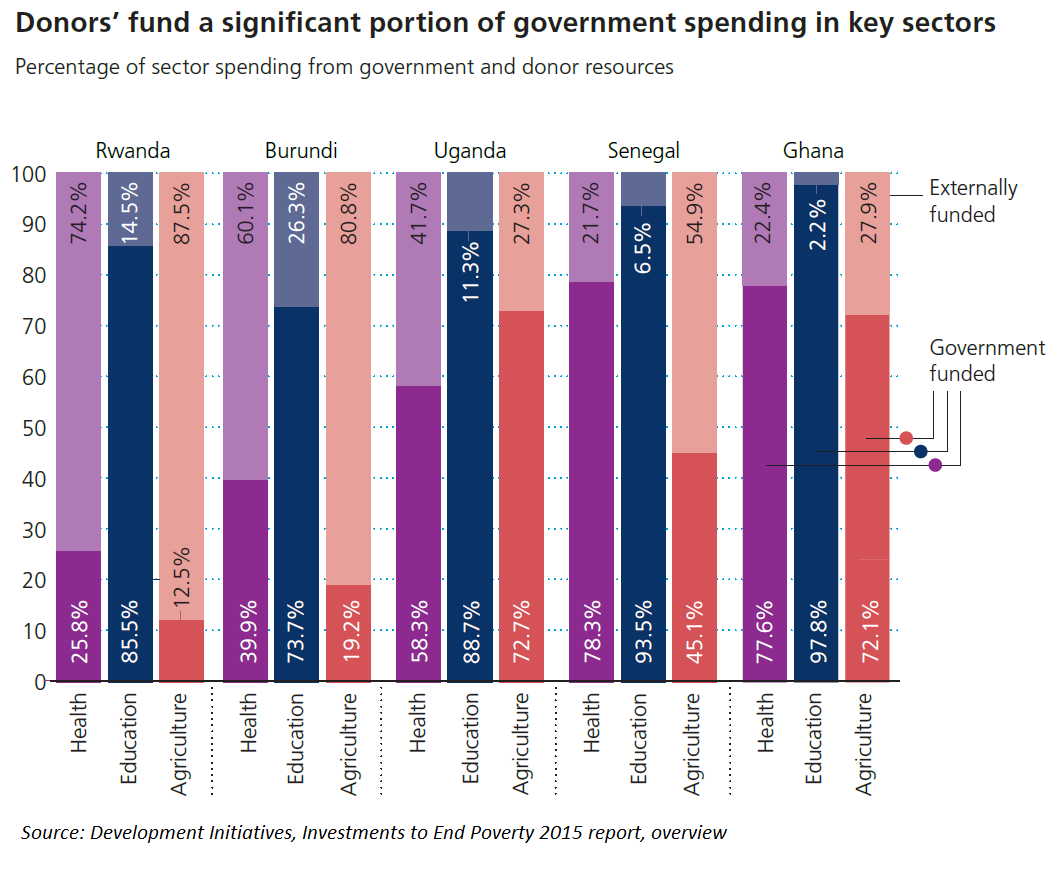 Explore further in our Development Data Hub: health spending in Senegal and education spending in Uganda.

There are a number of potential issues with governments having such a reliance on funding for key sectors from external concessional finance:

Given the lack of potential return on investments in some key sectors, non-concessional finance is not a viable option. Therefore, domestic public resources is the best avenue for increasing funding to provide a financing core that is both sustainable and predicable. This solid core should significantly increase the potential to shape other financing to meet national development plans.

But there is potential for greater domestic resource mobilisation

While low revenue may put financial constraints on providing services and making investments, such a low baseline leaves significant potential for improvement. Based on many developing countries mobilising resources equivalent to 20% of GDP as a minimum, many of the poorest countries (that raise less than 15%) have the potential to realise a substantial rise through strategies to strengthen national institutions and improve tax collection systems.[1]

Donors clearly have a role to play in this; domestic resource mobilisation through ODA is gaining more attention and recent commitments to doubling technical assistance in this area is in recognition of countries making better plans at the national level for setting and achieving SDG targets. This does hold the caveat that a lot of work needs to be done to better understand aid spending on domestic resource mobilisation and therefore the impact it is able to have, but this is a step in the right direction.

And progressive taxation needs to be championed

Donors and national institutions must be careful to ensure that progressive forms of taxation are championed; evidence shows that many of the poorest countries rely heavily on indirect taxes, which runs the risk of placing a heavier burden on those on the lowest incomes. 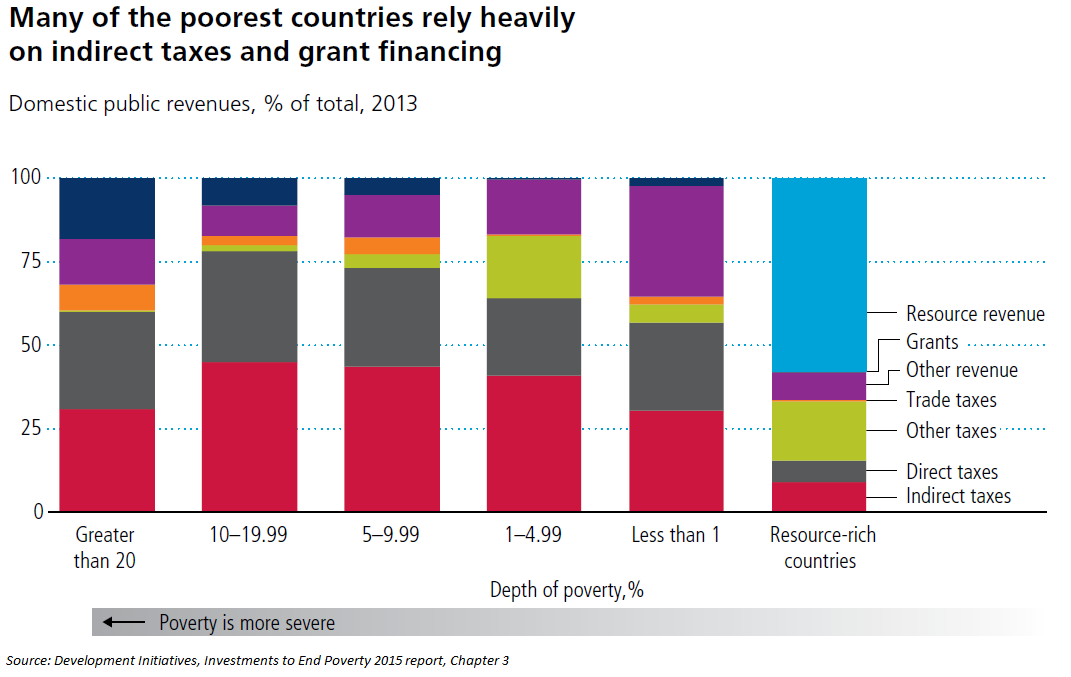 What does this all mean?

While committing to a national-led approach, we must acknowledge that the poorest countries cannot successfully end poverty without appropriate external funding and sufficient domestic resource mobilisation. There are a number of success factors that need to be ensured: