Burundi at a crossroads

Protestors see the President’s decision as unconstitutional because the presidential office is limited to two terms. The protests and ensuing violence is t

In recent days protests have engulfed the Republic of Burundi following the decision by the President to seek a third term in office in the upcoming general elections.

Protestors see the President’s decision as unconstitutional because the presidential office is limited to two terms. The protests and ensuing violence is threatening to regress this tiny landlocked country to the civil war that was witnessed in the 1990s.

What has been achieved since 2000?

Over the past 15 years, the Republic of Burundi has successfully stabilised following a series of civil conflicts between 1993 and 2000. This stability has brought significant national, regional and international benefits.

At the national level, Burundi has experienced stable positive economic growth since 2000. GDP has risen from -1% in 2000 to 4.7% in 2014 and is expected to continue this upward trend, growing to 5.5% by 2020 (see figure below). For a tiny landlocked country like Burundi, this is a major achievement following a sustained period of peacetime. Linked to the positive GDP growth, resources for pro-poor sectors like education and health have also seen a steady upward trend. Government spending on education increased from 13% in 2000 to 16% in 2012 (as a percentage of total expenditure), while spending on health doubled from 7% to 14% over the same period. For a recovering fragile state, these are remarkable achievements.

On the regional front, the Republic of Burundi joined the East African Community (EAC) in 2006 enabling access to regional markets and trade routes to the Indian Ocean, as well as increased labour opportunities. Burundi’s membership of the EAC has been a major factor in further stabilising the country and providing an outlet to regional and global markets. The country’s economic performance is also gradually converging with the region’s average GDP growth (see figure above).

ODA investments in Burundi have primarily focused on supporting peace and stability efforts as well as some pro-poor efforts in the health sector. 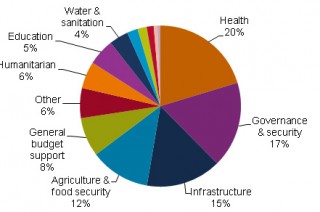 What is at stake for Burundians?

Besides the mentioned gains since the return of peacetime in Burundi, what does the current crisis really mean? The Republic of Burundi is the fifth poorest country in the world, and the poorest country in the East African Community. It received a tiny proportion of aid (and also has a very weak domestic resources base). Hence it lags behind its EAC counterparts in all human and social indicators. Education and health per capita spending is the lowest in the region. The latest data shows out of 9.5 million Burundians, 81% or approx 7 million live below the $1.25-a-day poverty line. Furthermore, a deeper look at the poverty situation in the country reveals that those who are impacted by multidimensional aspects of poverty stand at 80% of the population (see table below). Of the poor people in Burundi, 14% are classified as being vulnerable to intense poverty and deprivation. It is therefore not surprising a significant proportion of the Burundian population stand to be made worse off should the current crisis deteriorate any further.

The Republic of Burundi and the people of Burundi find themselves at a crossroads in 2015. The decisions taken today will have far reaching consequences for the fifth poorest nation in the world. Poverty and lack of investable resources are a dangerous combination – a recipe for deeper conflict when crisis strikes.