Size of bubbles represents volume of adaptation-related ODA commitments in 2013, US$ millions. Vulnerability to climate change is defined as a country’s ex

Adaptation ODA is often allocated to less vulnerable countries with lower levels of poverty while countries most in need, especially conflict-affected countries, are poorly targeted 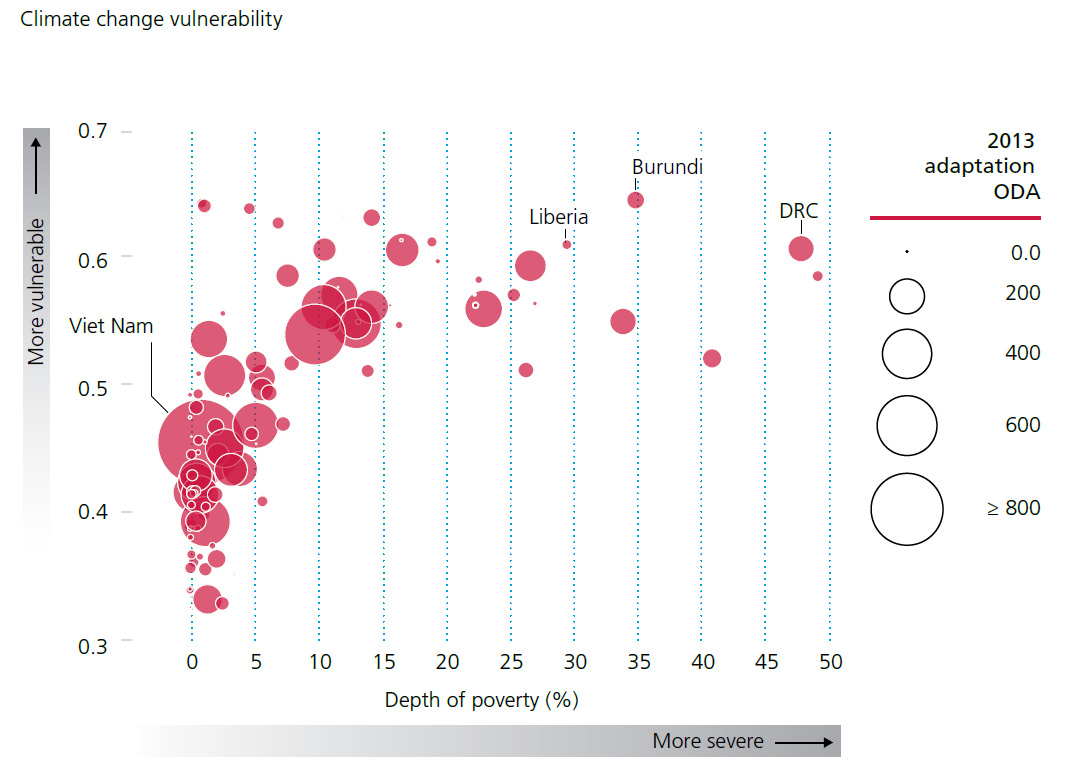 Size of bubbles represents volume of adaptation-related ODA commitments in 2013, US$ millions. Vulnerability to climate change is defined as a country’s exposure, sensitivity and ability to adapt to the negative impacts of climate change, based on data from ND-GAIN – higher scores mean greater vulnerability.

Many of the world’s poorest people live in environmentally vulnerable places, and are more severely impacted than most by climate and other natural disasters as they are often the most exposed and have the least access to sustainable coping mechanisms or safety nets.

During COP21 (the 2015 Paris Climate Conference) this fortnight, world leaders and industry experts are coming together to discuss solutions to climate change and promote sustainable growth. This presents a key moment to look at adaptation-related official development assistance (ODA) – aid for building resilience to the impacts of climate change – and assess its ability to target the most vulnerable people. Current data shows that much needs to be done to ensure it is protecting those who are most at risk.

ODA is the primary international public resource that can be explicitly dedicated to reducing poverty. Thus among the multiple climate finance mechanisms that currently exist, climate-related ODA has a particular responsibility to recognise the links between poverty and climate change vulnerability and support interventions that assist the poorest people to mitigate against or adapt to the effects of climate change.

Climate-related ODA, particularly adaptation ODA, has an especially important role to play in the Sustainable Development Goal (SDG) era given extreme poverty is increasingly concentrated in complex and challenging contexts where conflict, instability and environmental vulnerability overlap. Adaptation ODA can help ensure the sustainability of SDG target outcomes through supporting interventions that seek to end poverty by strengthening the resilience of the poorest people against shocks and stresses that threaten efforts to end poverty.

Our analysis of data from the OECD shows that total climate-related ODA investments have been increasing over the last decade but contributions from bilateral donors do not adequately target countries where vulnerability to climate change and poverty is greatest. In 2013 for example, just 9% of country-allocable[1] adaptation ODA targeted countries with the highest levels of vulnerability to climate change.

Our chart looks at the volume of adaptation ODA commitments to developing countries against their vulnerability and poverty depth levels and shows how resources are not allocated to where need is greatest. Liberia, Burundi and the Democratic Republic of Congo for example received just 2% of total adaptation ODA in 2013 despite being in the highest ranges of both poverty depth and vulnerability. Conversely, over a quarter (27%) of adaptation ODA targeted countries with medium levels of vulnerability and relatively low levels of poverty (1%–5%). Viet Nam received the single greatest amount, equal to 13% of total adaptation ODA, yet is statistically less vulnerable than most countries and has less severe poverty.

Our chart also reveals that many of the countries among the highest ranges of vulnerability and poverty depth are also countries facing conflict and political fragility. Such countries in particular receive relatively small amounts of climate-related ODA despite their vulnerability.

Although this is a top-line analysis, it is clear that support currently provided to developing countries for climate change adaptation falls short of needs and could be targeted more effectively. Further analysis is of course needed, and is limited by a lack of comprehensive and quality data on poverty and vulnerability. While improving adaptation-ODA allocations, we must also therefore be seeking much better data to track existing and new commitments and most importantly to monitor the progress of the world’s poorest and most vulnerable people.

Explore further: which countries are most vulnerable to climate change?

For a detailed explanation of ‘depth of poverty’ see Investments to End Poverty 2015 information box 1.1