Aid down slightly in 2014, but what else does the new DAC data tell us?

After reaching a peak in 2013, official development assistance (ODA) fell by 0.5% in real terms in 2014: Collectively, ODA from the 28 Organisation for Eco

15 of the 28 DAC countries saw ODA levels fall: The largest fall was recorded by Japan, with ODA falling by US$1.8 billion. Japan’s increase in ODA in 2013 was boosted by exchange rate factors and one-off debt relief to Myanmar. France recorded a reduction of US$1 billion in 2014.  This follows a similarly large fall in 2013, meaning that French ODA has declined by 18% over the last two years.

However, 13 donors recorded increased ODA: Total ODA from Germany rose by US$1.7 billion, while ODA from the US and Sweden rose by US$0.7 billion and US$0.6 billion, respectively. 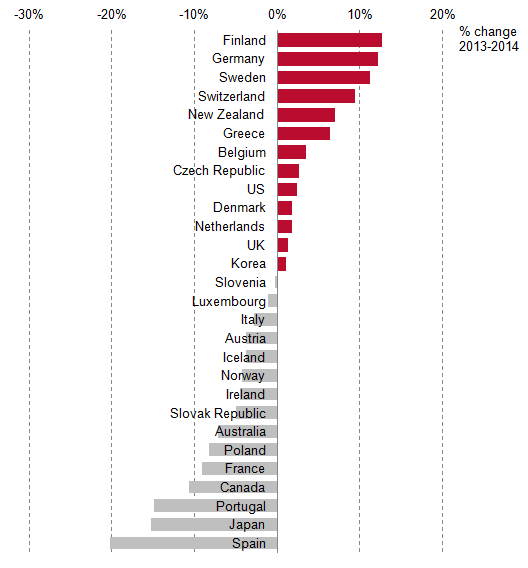 * Three donors (Japan, Sweden and UK) use SNA93/ESA95 as the basis for calculating GNI.

Most donors have changed how they calculate GNI: 25 of the DAC-28 have adopted a new international measure of GNI against which they report their ODA. This tends to lead to slight upward revisions of GNI and so corresponding falls in ODA/GNI ratios. The three donors still reporting ODA as a share of GNI on the old measure of GNI are Japan, Sweden (who reported a rise in this measure from 1.01% to 1.10%) and the UK (who reported just over 0.7% for the second year running).

* Three donors (Japan, Sweden and UK) use SNA93/ESA95 as the basis for calculating GNI.

Share Aid down slightly in 2014, but what else does the new DAC data tell us?